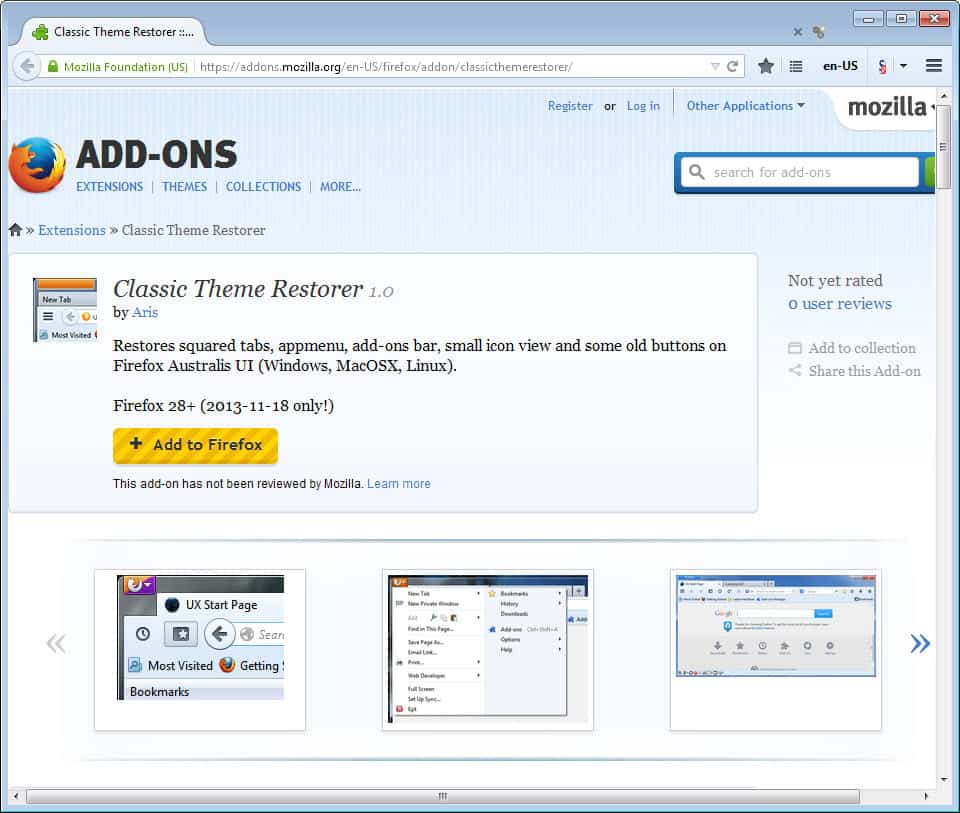 The Australis interface redesign of the Firefox web browser is something that Mozilla has been working on for a long time.

The redesign is controversially discussed, as it removes several features from Firefox's core, such as tabs on bottom or the add-on bar, which some users of the browser see as simplifying it.

While it is possible to get back those missing features by installing add-ons such as Classic Theme Restorer, it means that Firefox users who use those features rely on third-party authors for continued support.

Only Firefox's Nightly channel has been upgraded to the Australis design yet. It has been this way for some time now, and up until now, it was not clear if Mozilla would be able to keep the timeline and release Australis to the stable version of Firefox 29 as well.

The organization made the decision to uplift Australis to Firefox Aurora when it is upgraded to version 29 in the beginning of February.

What this means is that Aurora and Nightly versions will feature the new interface design and the changes that go along with it.

It is however not clear yet if Australis will be added to the upcoming Beta uplift on March 17th. Mozilla hopes that it can meet the deadline as it would ensure that Australis could be released as part of Firefox 29 Stable as well. If the deadline is missed, it is likely that Firefox 30 Beta and Stable will receive the Australis upgrade instead.

Mozilla's intent is to release Australis to Firefox 29 Beta if at all possible, as there is "significant risk to backing out a large project from Beta".

Firefox users who switched to the Holly branch -- that is a version of Firefox without Australis but up to date in all other regards and identical to the Nightly version -- should take note that Mozilla plans to cease maintaining The Nightly version of Holly to maintain a backout-branch of Holly for Aurora instead.

It is not clear yet if the -- 150 according to Mozilla -- Holly users will be upgraded to the Aurora version automatically.

In other news, Australis Nightly survey results have been summarized. According to that summary..

Previous Post: « Firefox app for Windows 8 gets private browsing mode
Next Post: How to sort Firefox bookmarks by age or visit count »