How to print documents faster

I'm currently printing lots of emails, payment notifications, invoices, and other documents for tax purposes. I'd estimate that I have printed about 800 pages so far in the last two days, and I'm not even halfway through.

One of the things that I wanted to make sure of before I start this print marathon was that the documents got printed as fast as possible. I knew that it would take a long time no matter what, considering that I only have access to a home printer and not one of those blazing fast enterprise printers that don't break a sweat if you throw hundreds of pages at them.

Anyway, I bought a new printer just for the occasion, a cheap and efficient Brother DPC195c. What made me select the printer was its price, the reviews, and that I could get third-party ink for it for a very, very low price.

Printing faster is a question of the printer, as much as it is one of tweaks that you can apply. If your printer is very slow, then you probably won't have luck speeding the printing up by a lot by applying tweaks.

Here are my suggestions:

1. Change the quality of the printout 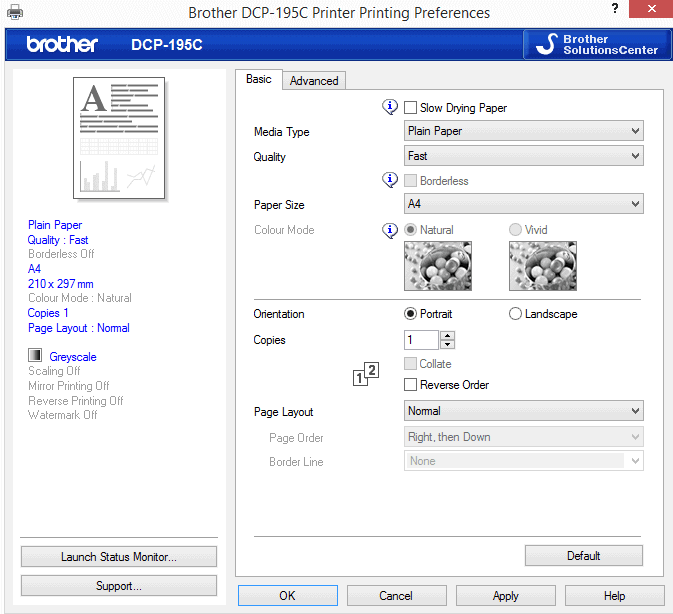 I prefer to print in black only, and while I cannot say if that makes a difference speed-wise or not, modifying the quality of the printout does.

To be clear, it is necessary that you find an acceptable quality on your own. What works for me quality-wise may not work for you.

The quality is set to normal most of the time in the printing preferences. While they may look different depending on your printer, you usually have options to increase or decrease the quality here.

I suggest you create a test printout using the new quality settings to find out which works best for you.

Depending on the printer that you are using, you may find other options in the printing preferences that speed up the printing. The Brother printer has an option under Other Print Options that lets you change the transfer mode to improved print speed from the recommended setting.

This may not always be possible, considering that the printer may not be near a router or computer, so that wireless is the only option in this case.

Depending on network setup, the signal strength, and other parameters, wireless printing may be a lot slower than wired printing, or only a bit slower.

Print spooling has its uses, as it gives you more control over the print queue. This can be useful if multiple users share a printer, or when you send lots of different documents to the printer in short time.

According to Microsoft, switching the default "Spool print documents so program finishes printing faster" to "Print directly to the printer" decreases printing time.

This feature needs to be enabled in the printing properties of the printer. When you enable it, Windows will keep a copy of the document so that it can be re-added to the queue directly instead of from the program the original print job came from.

This is only useful if you know that a program will be printed more than once in a short period of time.

If you send a large document to the printer, especially a high-quality one with images or fancy graphics, then your printer may slow down because of that.

You may be able to speed up things by sending only part of the document to the printer. So, instead of sending all 1000 pages directly, only send the first 50 or 100 and see if it speeds things up for you.

Third-party printing software such as FinePrint may help you save ink and speed up the print job as well. It can remove unwanted images and text for instance, or remove blank pages from the job automatically.

If your printer is very slow, and you know that you have to print out lots of documents soon, you may want to consider buying a new one.

This may not be always possible of course, but if you have the money, a new printer may save you enough time to justify the costs.

Do you have other suggestions to speed up print jobs? Lets hear them in the comments below.

Previous Post: « Find out which Microsoft .Net Framework version a software requires
Next Post: Why is CCleaner listing the same extension, app or plugin multiple times? »