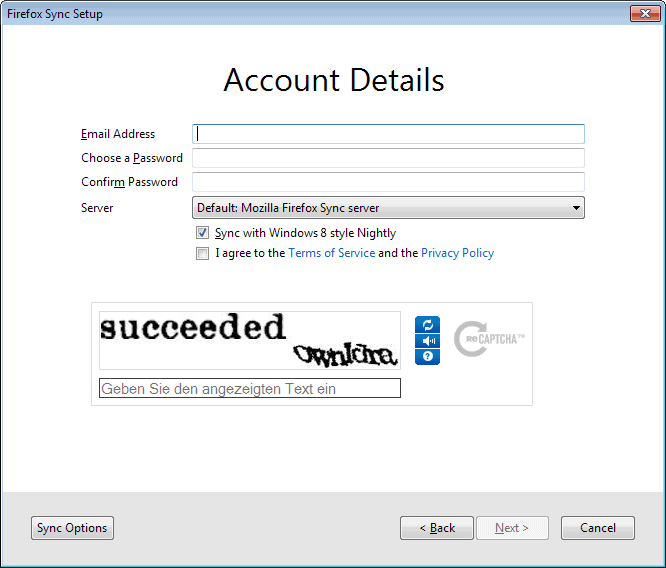 Firefox Sync, the web browser's data synchronization feature, is not overly popular according to Mozilla. Only 1% of all users have it enabled, and of those, only 20% have set up a second device with which data is synchronized.

Mozilla's main motivation to improve Sync is to make it easier for users to set the system up, as it believes that it is the main reason why Sync is not used by more users of the browser.

Besides improving the usability of Sync, improvements are also desired in terms of quality and scalability of the service. Mozilla notes that its Sync servers are failing too frequently, and that the existing codebase is not adequately addressing "the reliability, performance, fault recovery, and efficiency requirements" of high-usage systems.

The current version of sync is also limited in terms of features that can be added to it, and this is also something that Mozilla wants to change as it puts Firefox's synchronization feature at a disadvantage when compared to other browsers.

The current plan is to ship Firefox Sync 1.5, the current version is 1.1, with Firefox 29. The goal is ambitious, considering that code will be frozen for that version of Firefox on January 29th.

The browser version itself will be released on April 29, 2014, and while time is limited, it is likely that Mozilla will improve the feature in the Aurora and Beta builds of Firefox 29.

The time constraints to mean that Firefox OS and the Modern UI version of Firefox for Windows 8 won't be supported initially by the new Sync.

What it means for existing users

Things do get a bit complicated for existing users, as it is not possible to easily migrate them from one Sync version to the next.

When Firefox 29 comes along, nothing at all will change for existing Firefox Sync users. Users who have not configured Sync yet will be introduced to the feature. This happens for instance on the new tab / home page.

Existing users can add new devices to Firefox Sync up until Firefox 28. This won't be possible anymore in Firefox 29, which may cause some confusion depending on how well -- or at all -- this is explained during the setup.

Starting with Firefox 29, it is no longer possible to create new Sync 1.1 accounts. From that version on, only new Firefox Sync 1.5 accounts can be created.

There is no option to sync data between a device running a Sync 1.1 account and another that is using the new synchronization version due to differences in data handling and storage.

Starting with Firefox 30, existing Sync users will be migrated to the new version, while the old Sync will be retired when Firefox 31 comes along.

What this means basically is that existing Sync users need to create a new Sync account and use it from that moment on. Once the New Sync account is created, it can be used like the old one. It is however necessary to set it up on all devices that need to be synchronized.

Firefox Sync 1.1 allowed you to run your own sync-servers. The feature will theoretically be also available as part of Firefox Sync 1.5, but it will not be released right away with the Sync 1.5 update in Firefox 29.

To set up a New Sync account in Firefox, the following needs to be done:

Once verified, the account can be used on other devices to enable synchronization. (via Sören Hentzschel)

All in all, it is up to Mozilla to explain to users why it is necessary to update Firefox Sync in a way that it is no longer compatible with the previous used version.

If that is not handled well, it could irritate users who are using Sync currently. This is also true for Sync users who use self-hosted servers, as they won't be able to continue using them in the way they are setup currently when the New Sync is launched.

Previous Post: « Upcoming security improvements in Firefox 27 in regards to TLS support
Next Post: The main reason why Chrome has tab audio indicators and Firefox does not »