Both of these tools are last lines of defense. When a script, code, program or hacker manages to bypass all other security, such as a hardware firewall or resident antivirus software, these come into play.

They mitigate means to exploit vulnerabilities on the system, and can prevent attacks from being successful because of this. This can either mean that they stop the attack dead in its tracks, or that they reduce the impact that it may have on the system.

Malwarebytes Anti-Exploit was displayed a Beta version expired notification yesterday evening. In fact, it displayed multiple popup messages that informed me about it. All said the same thing:

The beta testing period has finished and Malwarebytes Anti-Exploit is not protecting you anymore.

The problem was, there was no newer version at that time. The main program homepage over at Malwarebytes listed the old version that I had installed on my system, and the forum did not link to new versions as well.

Today, I discovered a new post with an updated version attached to it on the forum. If you have been running Anti-Exploit on your system, this is the version that you need to install to fix the issue. 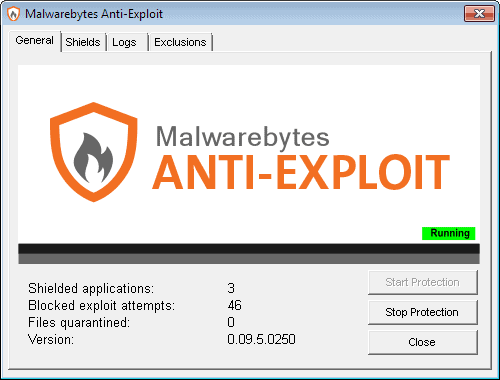 So, all that needs to be done is download the new version and install it over the old one. Note that Malwarebytes recommends to close all browsers and other protected apps before you start the installation. The company does recommend to uninstall the old version as well, which you may want to do as well.

The new version includes several new anti-exploit techniques that the developers have added to it. In addition, support for Windows 8.1 and compatibility with several other programs such as Chrome extension, HitmanPro.Alert or Acrobat Reader have been improved.

To test whether the program is working correctly, check if it is running in the system tray. When you bring up its interface, it should display a running status message in it. In addition, you can run the mbae-test.exe file to find out if the program is catching exploits correctly. 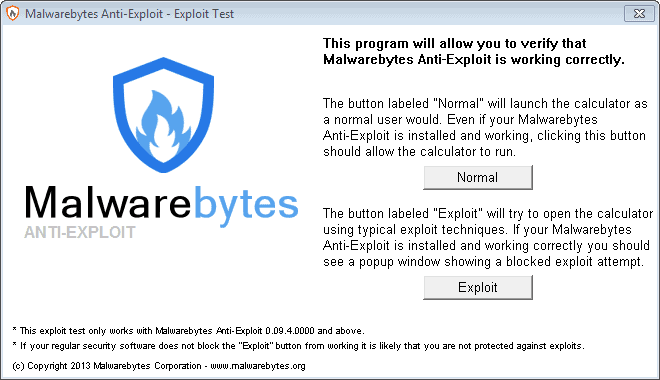 The exploit test offers two verifications that you can run. When you hit the normal button after launch, it should launch the calculator on your system. This is the normal behavior, and the test is successful if the calculator is launched.

The exploit button will attempt to load the calculator using exploit code. If the program is working, calculator should not be launched and you should receive a "Exploit attempt blocked" popup by Anti-Exploit.

Update: You need to download the exploit test program from this url, as it does not ship with the program itself.

Back to the expiration issue:

The program has a hard coded expiration date due to it being a beta version designed for tests. It was unfortunate that the last version expired before Malwarebytes released a new version that extends the beta period. In addition, there is no auto-update feature included right now, which means that you will have to update manually at all times until that gets added.

Previous Post: « Browser in the Box: safe browsing solution for critical Internet activities
Next Post: How to prevent Google from linking you to your searches »