Explain Shell breaks down Linux command line arguments for you

While it is possible to use modern Linux distributions without touching the command line at all, or only on rare occasions, you will usually quickly come into contact with command line arguments when you want to make a change to the operating system and need to research how it is done on the Internet.

You can run these commands right away, but if you do not really know what they will do, it is usually not a good idea to do so.

Back in the days when I had to do some research on how to do certain things on a Linux server, it was quite common that some elitist users suggested you run the rm command on your server to fix the issue you were facing.

Their reasoning was that you should not be running Linux if you did not know it, and while they were certainly right to a degree, making the point by letting users run commands on their systems that wreaked them was hardly the way to do so. 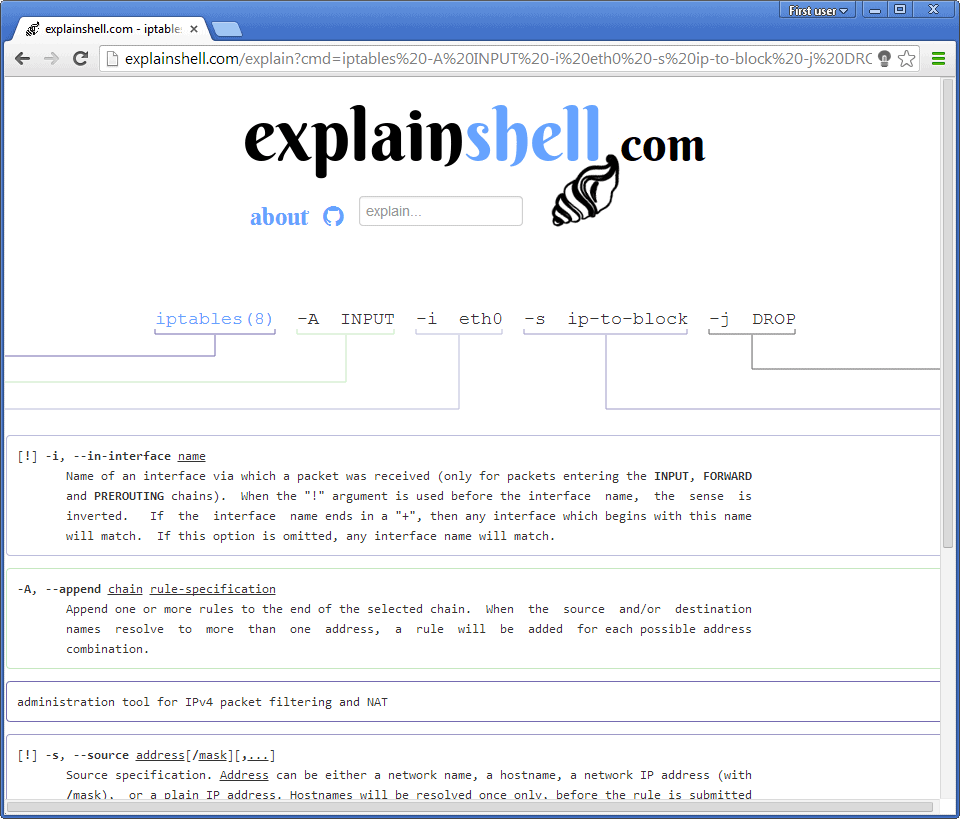 Explain Shell is a free online service that will break down command line arguments that you enter for you. If you do not know what the commands find . -type f -print0, tar xzvf archive.tar.gz or iptables -A INPUT -i eth0 -s ip-to-block -j DROP do, you can find out now using the service.

All you need to do is paste or type the command including all of its arguments into the form on the main website, and tap on the enter key afterwards.

The web service will look up the command, and break it down into its parts. Each element of the commend is explained on its own, and highlighted when you move the mouse cursor over it.

The source of the information is taken from manpages. While you can get the same information by displaying all arguments of a command on the command line, or by going through the manpage of a command manually, it is usually easier and faster to use Explain Shell instead.

If there is one thing to criticize, it is that the order of explanations is not necessarily the order of the command line argument. In the example above for example, the actual command (iptables) is listed in the third position and not the first as you would expect it to.

Explain Shell is a super-useful service for Linux users of all experience levels. It will quickly break down commands so that you can understand what they will do in as little time as possible.

Previous Post: « Surprise! DuckDuckGo is Gnome's new default web search engine
Next Post: How to install Linux on a computer without DVD drive »