If you are trying to install a browser extension for the Chrome web browser that is not offered on the official Chrome Web Store but a third party website, you will receive a notification that the installation of the extension has been blocked.

The same is true for userscripts that you may want to install in Chrome.

It is currently possible to install those extensions, but it requires a manual workaround for that. The extension gets downloaded to the local system, and can be installed from there to the Chrome browser by dragging and dropping it to the extension manager in Chrome.

Google does this to protect users of the browser, as malicious extensions get distributed on third party sites almost exclusively. Recently, the company began to scan extensions that users wanted to install in the browser to warn them if malicious code was found in them.

The company announced today that it will block all third party extension installations to Chrome Stable and Beta on Windows.

What this means is that users running the stable or beta version of Chrome on Windows won't be able to install third party extensions anymore. Basically, any extension not offered in the Chrome Web Store won't be available to them. 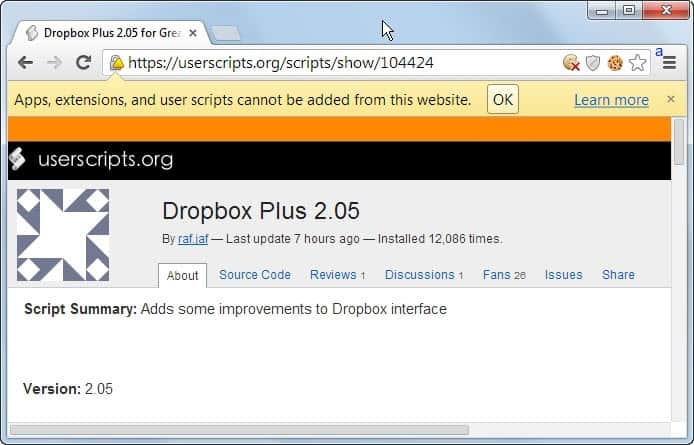 While that means malicious extensions, it also means any extension that cannot be offered on the web store which is usually the case when it does not comply with all store policies.

Yes, this includes media download extensions like Media Hint and a couple of other popular extensions. While it is still possible to install and use those extensions in Chrome Dev or Canary, or Chromium for that matter and maybe even Opera, it is certainly a welcome side-effect of the policy change in the eyes of Google.

It is not clear if userscripts fall under the policy, or if they are exempt from it. That remains to be seen once the change is made.

Google notes that the change will go live in January 2014, and that developers have options to hide extensions in the store.  Local extension installations during development, Enterprise installations, and Chrome Apps will continue to work normally according to the blog post on the Chromium blog.

Existing extensions will continue to work just like before, but it is not clear how updates are handled.

Chrome users on Windows who rely on third party extensions may want to switch to a channel that is not affected by the new security policy, or switch browsers altogether instead.