Google to drop support for Internet Explorer 9: what it means

by Martin Brinkmann on November 06, 2013 in Internet Explorer - 11 comments

Google published a reminder today on the Google Apps blog that it has ended support for Microsoft Internet Explorer 9. What this means is that the company will not test existing or new features on Google Apps or Gmail for compatibility with the web browser.

It does not mean that Internet Explorer 9 users cannot access Google Apps or Gmail any longer, but it is likely that it will have consequences in the long run.

Some features may not work any longer in Internet Explorer 9 as a result of this, and there is nothing that users of the web browser can do about this.

Google's browser support policy ensures that the two latest major versions of Firefox, Internet Explorer, Google Chrome and Safari are supported. When a new version gets released, it means that the third-oldest version won't be supported anymore by the company.

The consequence here is that both XP and Vista users can only run unsupported versions of Internet Explorer when they use Gmail or Google Apps.

While some may have the option to use a different web browser, the latest version of Chrome or Firefox comes to mind, it may not be always the case.

If Internet Explorer is the only web browser that may be used on company computers, you may experience issues on Gmail or Google Apps as a consequence. 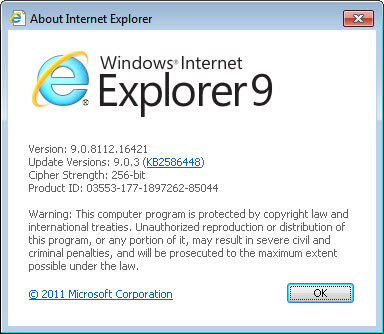 Google announced that it will display notifications to Internet Explorer 9 users who connect to Gmail or Google Apps informing them that support for the browser has dropped.

It is likely that the company will use the opportunity to advertise Chrome (and maybe other browsers) to those users, but since the notifications are not live yet, it is not clear if that will be the case.

The company notes that some features may not work in unsupported browsers, and gives a few examples of features that may not function or applications that may not load:

It is not clear if Internet Explorer 9 users will experience these issues, considering that the features did work fine in the browser until now.