Feedly brings back lifetime accounts for $299

RSS is the best way in my opinion to keep an eye on everything that is hot in a particular niche on the Internet in the shortest amount of time possible. I can go through hundreds of articles posted on a day in less than 10 minutes, pick out those of interest in numerous ways, and ignore the rest. No other service gives me that flexibility and speed.

Google Reader was without doubt the number one online feed reading service on the Internet. With its shutdown came other services that tried to fill the gap that it left, and the one service that -- probably -- did it right the most is Feedly.

The service does a lot of things right. It has a web-based interface that you can load in any browser of choice, app support, and an API that third party apps and programs can tap in for support.

A free service is provided by Feedly that is limited in several ways, including slower updating of "smaller" news feeds and no full article search option. 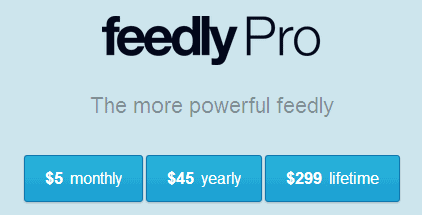 While it is understandable that Feedly distinguishes its Pro user accounts from free accounts, it has been criticized for making essential features such as the delivery time of news updates a Pro feature.

Pro accounts were available as monthly or yearly subscriptions up until now for $5 and $45 respectively. The company behind Feedly ran a limited lifetime license test before where 1000 users were allowed to subscribe to a lifetime license for $99.

That lifetime license is back now, but the price of it has more than tripled. You can buy a lifetime license of Feedly Pro for $299 currently so that you can use the Pro version of the service forever without having to make a payment again to the company.

That's a long commitment, and if you consider that services come and go on the Internet at all times, it is definitely a good idea to consider that before you get a lifetime license. If you think that the company will be around in ten years, and that you will still be using a feed reader at that time, then picking the lifetime license makes sense, as you will pay less over the course of the ten year period, provided that Feedly won't reduce pricing along the way.

What's your take on this? Would you pay $299 for a lifetime license?

Now Read: What you need to know about Feedly