Mozilla launches Get Australis: invites everyone to install the latest Firefox Australis version

The new Australis interface that Mozilla plans to ship in one of the future versions of the Firefox web browser is as controversial as it can get in the community. While some applaud Mozilla for the fresh modern look that it ships with, others dislike it because of its resemblance to Google Chrome's interface or because of the interface elements that Mozilla will change or remove from the browser in the process.

I have covered the proposed list of changes of Australis previously here on Ghacks, and also tried to highlight why it is not a good idea to remove the add-on bar from the browser.

Things are not as dire as they seem, and this can be mostly attributed to Firefox's add-on support. Browser extensions are in the making that will restore features that were removed in Australis from the browser. While that is not the same as native features, it is the next best thing and probably the only hope of Firefox users who do not want to miss features that Mozilla removes from the browser.

Note: the screenshot above is how Firefox looked like when I loaded Australis using my main browser profile. I'm running only eight extensions in the browser, and it already looks crowded in the address bar.

Australis is still only available as a special UX build that is independently updated from all other browser channels that Mozilla makes available. It looks as if the deployment of Australis will get delayed, considering that the nightly version of the browser reached version 27 recently and that Australis was said to be launched way before that.

The Get Australis website aims to promote Australis to users of the browser. It enables interested users to download the latest Australis UX build to their system so that they can check it out and take it for a test ride.

The builds are provided for every desktop operating system Firefox supports, Mac, Windows and Linux.

If you launch Australis for the first time, you will notice several differences to regular Firefox versions.

To be fair, it needs to be said that you can customize the new Firefox panel menu. You can add or remove items that you use or do not use from it. If you are a web developer, you can simply drag and drop the developer options back to the menu, or add-on icons so that they do not take up all that space in the address bar.

I'm fairly certain however that the interface change will be highly confusing to many Firefox users. If you look at all the support threads that are caused by minor changes in the browser, it is almost a given that support requests will explode when Australis launches.

Users may want to know where this or that option went, how they can access a particular feature of the browser, or why Mozilla made the decision to remove or change a feature in first place.

Anyway, if you want to test Australis on your system right now, head over to the Get Australis website to get a taste of it. It installs next to any copy of Firefox you have running (but will use the same profile).

Note 2: The installation will use the same profile as your main Firefox installation. While that should not pose any issues, you will notice that it will move a few icons around in the interface as a consequence. That's easily repaired though, but we suggest that you do create a secondary profile instead for the purpose of testing the new Australis version of Firefox.

Update: Mozilla has altered the website and removed the download links that were previously hosted on it. You can download the latest Australis UX build from Mozilla's ftp server.

Update 2: Australis was launched. Links to Get the new Firefox design have been removed as a consequence. Check out What's Next after Australis to find out about Mozilla's plans going forward. 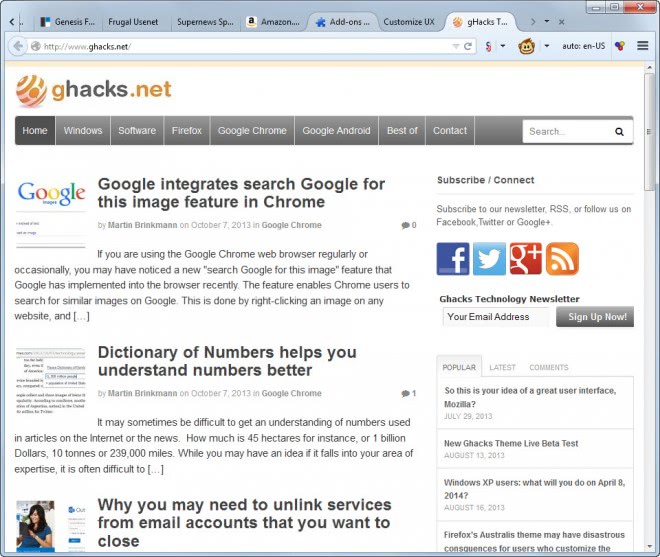