Companies that produce security software release new versions of their products in yearly cycle. That's not only done to increase revenue, but also for marketing to highlight that products are always up to date and able to face any new challenges that may arise.

Avast has just released beta versions of its 2014 security lineup which you can download and try if you are interested. It is not recommended to install them on productive systems though, but if you do have a test environment at hand, then you may want to take them for a test ride to find out what is new and what has been changed.

The following preview looks at the only free product, Avast Free Antivirus 2014. It is limited in comparison to the company's Pro Antivirus, Internet Security and Premier Antivirus products.

If you look at the product comparison chart on the Avast website - for Avast 8 or 2013 - you will notice that it is offering virus protection and remote access, but lacks all other features such as sandboxing or a firewall that some of the paid products make available. 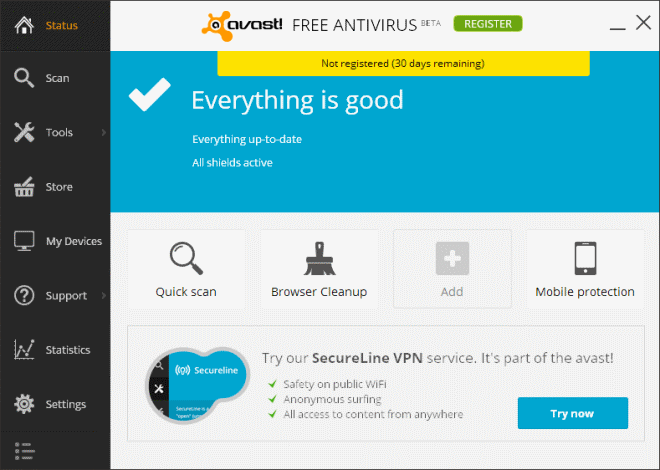 First thing you may notice is that Avast has reduced the size of the product and its memory footprint. The installer's size has been cut in half, and while that is great, it needs to be noted that it is now offered as a stub installer that requires an Internet connection during installation.

The beta versions are offered as offline installers, and it is very likely that links will be made available to download the full installers when the products get released officially.

You may notice the redesigned user interface on first start. Here you get access to the quick scan, browser cleanup and mobile protection, and can add one more program module such as the software updater to it as well. You can remove all of the modules here with a right-click to add others that you prefer to it. If you never do quick scans, only full scans, you may replace the former with the latter using this option.

The list of new Avast 2014 features linked above include several that are not available in the Free Antivirus product. Lets go through that listing one-by-one to find out what is included and what is not.

DeepScreen is an improved version of Avast's AutoSandbox feature. It is included in all Avast products and will sandbox suspicious files automatically on the system. Avast notes that it has been improved with new technologies such as dynamic binary translation and dyna-gen but fails to provide explanations on what those actually do.

DeepScreen, just like AutoSandbox, is a feature that runs automatically on systems that Avast is running on. All commercial versions of Avast give you manual control over the sandbox.

Hardened Mode has been integrated in all editions as well. It has been designed for inexperienced users and can be best described as lite whitelisting. It blocks the execution of binaries that would normally be sandboxed by the DeepScreen feature or limits the execution of files to those accepted by FileRep running.

The mode needs to be enabled under Settings > Antivirus > Hardened Mode. If you select moderate, it will block the execution based on the DeepScreen feature, while agreesive uses FileRep to block all but whitelisted apps. 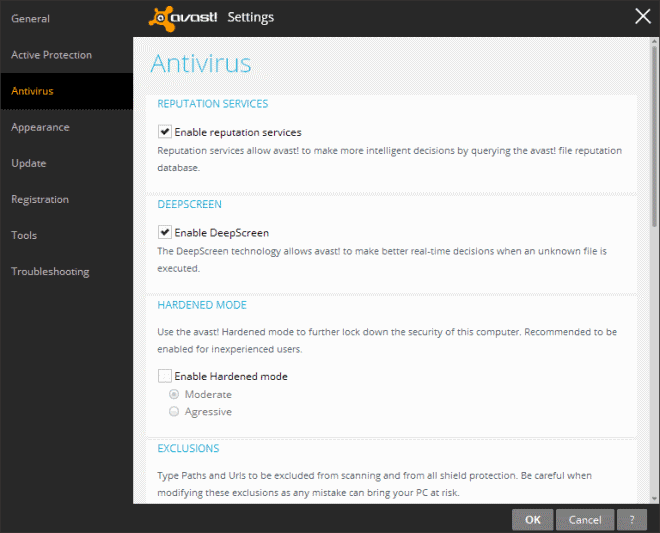 The Software updater has received improvements as well. While it is fairly limited in comparison to programs like Sumo, it takes good care of popular software such as web browsers, Flash Player, Java and a handful of other popular applications.

Browser Cleanup is the second tool integrated in the Avast Free Antivirus 2014. It is not a new program, but it is interesting nevertheless as you can use it to remove unwanted addons from web browsers.

Note that it is only possible to disable add-ons here, but not to uninstall them.

Make sure you check the known issues section before you start the installation as you may run into issues otherwise. Avast Free Antivirus 2014 ships with under the hood improvements that speed up scans and the software's memory consumption.

It does not feature many new features on the other hand, but that is not necessarily a bad thing either.

Martin Brinkmann is a journalist from Germany who founded Ghacks Technology News Back in 2005. He is passionate about all things tech and knows the Internet and computers like the back of his hand. You can follow Martin on Facebook or Twitter
View all posts by Martin Brinkmann →
Previous Post: « SecureAPlus: application whitelisting for additional security
Next Post: Bot Revolt is a Peer Guardian and Block alternative for Windows »