Windows 8 users will soon be able to use the special Metro version of Firefox on their operating system if things go as planned over at Mozilla. The non-profit plans to release the Metro version of the Firefox browser as part of Firefox 26 which will be released on December 10 this year.

As you may know, Windows 8 ships with two interfaces of which desktop is one. The other part is the start screen interface that was formerly known as Metro. Applications are limited in what they can and cannot do here so that companies cannot just port their existing programs effortlessly to the new environment.

It takes extensive resources to port applications like Firefox to the new environment so that they can run there. While some may question the usefulness of the move, considering that all Windows 8 users can simply launch the desktop browser whenever they need it, supporters of the decision have stated that it a special start screen version of Firefox provides users with a better experience when they are working there. 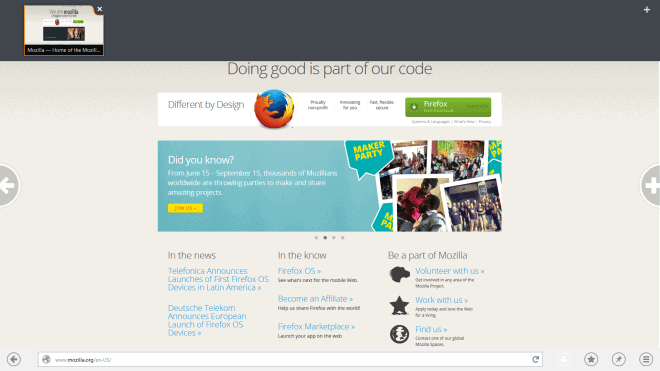 Firefox Nightly builds have included the Metro version of the browser for some time now. They provide you with a great opportunity to test the browser and the progress that is being made. Nightly builds are however only designed for testing and development purposes, and many users do not run them because of this.

This is going to change soon as Mozilla plans to roll out the new interface in Firefox 26. The interface will be integrated into the Aurora channel first on September 16, and then moved to the Beta channel on October 31, before it lands on the stable channel on December 10.

It needs to be noted that things may change along the way, for instance if new bugs are discovered that cannot be fixed in time. (via Sören)