If you are already running Firefox Aurora or Nightly, which are version 24 and 25 of the Internet browser, you may have noticed that Click to Play has changed recently. Click to Play is a feature that blocks plugins from running automatic on websites. This improves the rendering speed of the website and also the browser's security as elements do not get loaded automatically anymore.

Now, Click to Play for the most part needs to be activated before it becomes available. This too has been made easier in recent versions. Previously, you had to change a value on Firefox's about:config page so that most users did not really know about the feature in first place.

To enable it there, you had to do the following:

Mozilla automated part of that for security purposes in recent versions of Firefox, or announced plans that it would make changes. For security reasons, plugins that are blocked by Mozilla because of security or stability purposes, are set to click to play automatically. 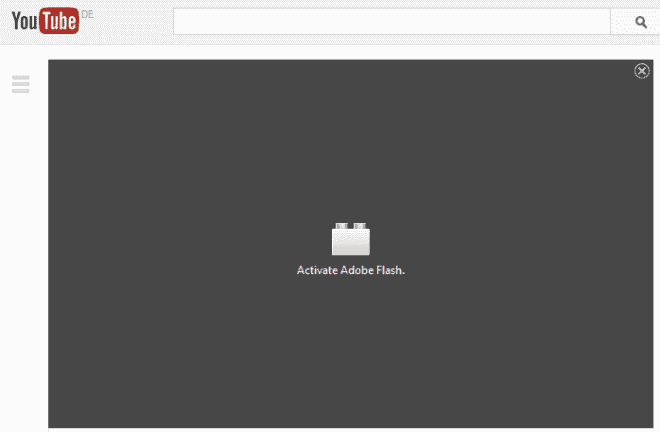 Back in January, it announced that it would enable click to play for third party plugins automatically in Firefox.

With Firefox 24 comes another change, this time one that may not please everyone. It reduces the functionality of the feature quite a bit. Instead of giving users options to enable individual plugins in the browser, a single YouTube video for example or one game on an arcade site, it now enables that plugin on the whole site.

Why? Mozilla's research came to the conclusion that most users find per-element click to play too confusing.

Update: Click to Play per element is no longer available. Mozilla dropped the classic add-on system of Firefox with the release of Firefox 57 and removed all classic extensions from the official add-ons repository. A comparable extension is not available for Firefox. End

The add-on Click to Play per-element comes to the rescue. It is only compatible with Firefox 24 and newer, and will re-introduce the original functionality back in the browser. Note that you need to have click to play enabled in about:config, and set the plugins to ask to activate in the add-ons manager for this to work.

If you prefer to have more control over Firefox's click to play feature, then this extension is the best bet you have to achieve that goal. Firefox users who dislike the change when their version of the browser updates to 24 can install it to regain the functionality they have previously had.

Martin Brinkmann is a journalist from Germany who founded Ghacks Technology News Back in 2005. He is passionate about all things tech and knows the Internet and computers like the back of his hand. You can follow Martin on Facebook or Twitter
View all posts by Martin Brinkmann →
Previous Post: « So this is your idea of a great user interface, Mozilla?
Next Post: How to disable JavaScript in Firefox »