A single image on a website can make the difference between a fast loading site and a slow loading one. The same is true for documents in regards to the storage they need and the time it takes to transfer them via email or other means.

Image optimization programs like Riot help you compress the image without affecting the quality at all or too much. This can sometimes result in a size difference of hundreds of Kilobytes or even more.

The aforementioned program has been updated to version 0.5 today, the first update of the program since February 2011. The new version upgrades several libraries the program uses for its optimizations, introduces new features, and also several bug fixes.

As far as new features go, there are four that the change log lists. Riot features an automatic optimization mode now that you can enable at the top. There is no real information as to how that works, but from what I gathered, it applies the selected settings automatically to images that you load into the program interface. 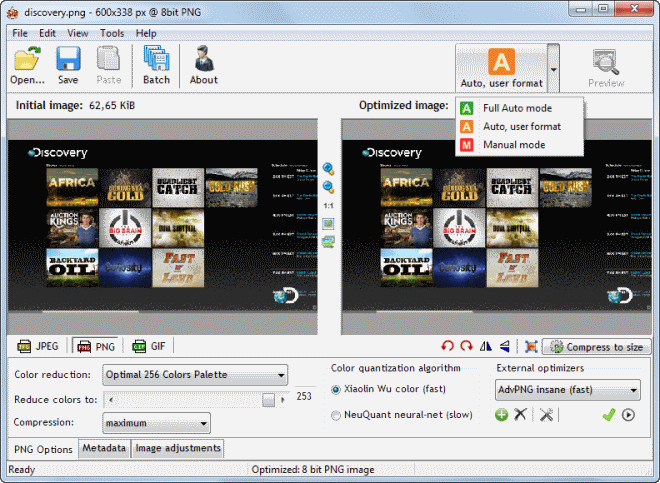 Another useful feature is the ability to drag folders into the program's batch processing window which improves the handling of image folder significantly. Previously, you had to mark all images in a folder and select them to be processed. Now, you simply drag the folder into the interface and are done with it.

The two other new features are progress monitoring when JPEG images are saved, loaded and resized, and loading support for the "half float" format to Tiff.

The internal png compression algorithm received four additional compression levels that improve the optimization of png images further, and the program itself benefits from improved resizing and resampling speeds, and faster color quantizations. Quite a few crashes and errors have been resolved in Riot 0.5 on top of that.

The program itself has not changed at all though which is definitely a good thing. You can still load individual images into the program interface to optimize them, or use the batch processing mode to process multiple one after the other without user input.

You can load various image formats into the application - including camera RAW formats if you install the RAW and HDR package, and save them as png, jpg or gif images.

What I particularly like about the program is that it remembers the modifications you make so that they are used automatically on next run, and that it displays the optimized image as a preview next to the original image so that you can compare the output and modify the settings if the quality deteriorates too much or if the size reduction is not big enough.

Note: The program uses Open Candy in the installer to deliver a third party offer during installation. You can avoid this by downloading the portable version of the application instead.

If you have been using Riot before you may want to upgrade to take advantage of the upgraded libraries and improvements the author implemented in the new version. Others may want to give it a try as well to see how it fares against their image optimization software.

Martin Brinkmann is a journalist from Germany who founded Ghacks Technology News Back in 2005. He is passionate about all things tech and knows the Internet and computers like the back of his hand. You can follow Martin on Facebook or Twitter
View all posts by Martin Brinkmann →
Previous Post: « FileCleaner: real-time temporary file cleaning software
Next Post: How to find out when a program has been last updated »