The Firefox Australis theme that is going to be released later this year if things go as planned seems to split the community. Some users are looking forward to a modernized theme while others fear that it will change the browser that they are using in away that it is not as customizable and usable anymore.

Mozilla launched Australis yesterday in Firefox's UX version and while there will be changes to it on a daily basis for the foreseeable time, it is the first time that regular users can catch a glimpse of what the new theme is all about.

Firefox UX Nightly builds can be downloaded from this address right now. They are available for Windows, Mac and Linux, with the Windows version available only as a web installer. They install separately on the system but use the same profile that you are using in a regular version of Firefox. 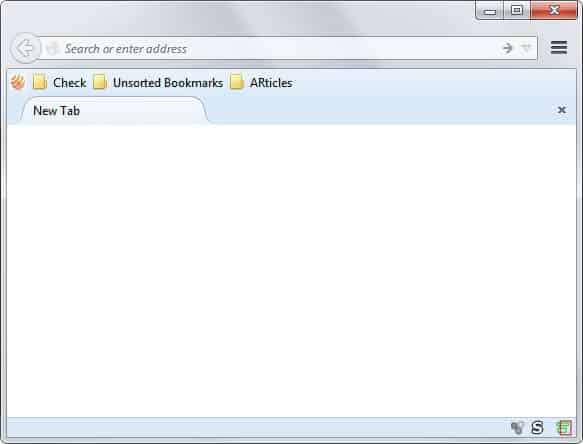 When I first started the UX build of Firefox on my system I was greeted with the following screenshot. Note that the browser did restore the tabs but to better make the point, I made a screenshot of the new window.

You will notice a couple of things right away:

So where is the Firefox menu button? It is not there and I first thought it was not there because tabs were displayed on bottom but that was not the case as it did not appear when I switched to a tab on top design.

A right-click and the selection of customize displayed the option to add the menu bar back, but that added the toolbar at the top and not the single Firefox button.

Short answer: Mozilla moved the Firefox button from the top left to the right of the address bar.

The new menu button displays often used operations that have been displayed in the Firefox menu before.

Maybe it is just me but I find the majority of options here useless. Good thing is, you can customize the menu which I really like. To do so click on customize to get started. 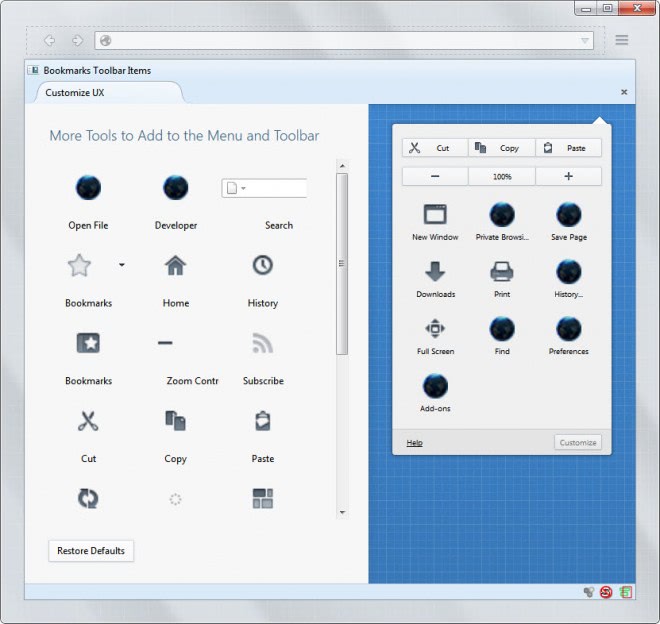 Just drag and drop items that you do not want to use from the right menu to the left, and items that you want to see in the menu from the left to the right. Not so good is the fact that you cannot move all items from right to left. The top two bars, the text operations and the zooming, cannot be removed from the menu.

One interesting aspect of this is that you can add your add-on icons here as well.

As far as toolbar customizations in general is concerned. I was not able to move the bookmarks button to the end of the navigational toolbar, but the same was true for the search form and all other buttons. This will likely be fixed in a future update. The new Firefox menu button cannot be moved at all though.

The tabs take up more space in the tabbar, but it is not as much as I thought it would be initially. It is about one tab less on a 1920x1200 screen.

Read more about this over at Jared's web blog.

Martin Brinkmann is a journalist from Germany who founded Ghacks Technology News Back in 2005. He is passionate about all things tech and knows the Internet and computers like the back of his hand. You can follow Martin on Facebook or Twitter
View all posts by Martin Brinkmann →
Previous Post: « Firefox 21.0: Find out what is new
Next Post: A closer look at Firefox's new Health Report feature »