It is probably fair to say that the majority of Windows users encountered toolbars in one way or the other. Maybe you did not pay full attention to an installation dialog and ended up with the Ask or Babylon Toolbar installed on your system, or you paid attention and though a toolbar offered by the program would aid you in a way or another, or, you have been asked by friends, family or colleagues to take a look at their PCs and discovered one or multiple installed toolbars while doing so.

I have published a few guides in the past that help you uninstall toolbars, and most computer users should not have any troubles following the instructions to do so.

Software may assist you in the removal. Programs like Junkware Removal Tool come in handy in several situations. Maybe multiple toolbars are installed and you want them gone as fast as possible, or you found a toolbar or program on your system but could not figure out how to remove it manually. 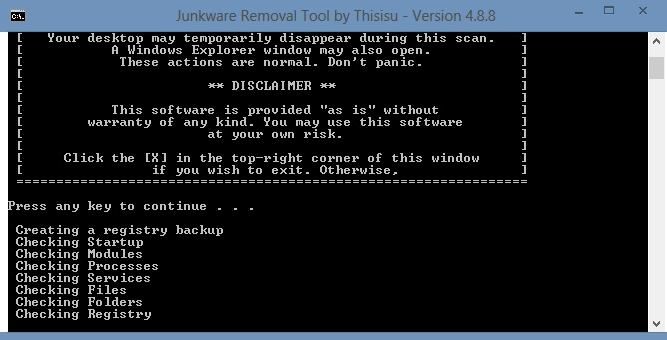 The main advantage of the uninstaller is that it is dead easy to use. All you have to do basically is to run it, press a key in the interface and wait for the program to scan the system for traces of toolbars and unwanted software that it can remove. If it finds any during scans, it will remove them immediately and without your doing. A log file in text form is created at the end and opened, so that you can find out exactly what the program changed on the system. The log file displays "successfully deleted" when it found a folder, file, or program on the system and removed it, and "failed to delete" when no such program was found or when it could not delete the data from the system.

You need to make sure that you have closed all web browsers and programs that may interfere with the scan or removal.

List of toolbars and unwanted programs Junkware Removal Tool can remove from the system:

As you can see, many programs and toolbars in the list that have a wider distribution on Windows PCs. As I said earlier, the main advantage of the program is that it can remove multiple programs found in the list above in one go. It creates a Registry Backup using ERUNT before it starts to remove files. I'd recommend you create a backup of your own or at least a system restore point before you run the application.

Previous Post: « Get Word-like auto-correct feature in all Windows applications
Next Post: Ignition optimizes file collections to fit them on the least amount of discs »