Disconnect 2 is a new version of Disconnect. a browser add-on for Firefox and Google Chrome that visualizes and blocks third party code that is executed on websites you visit. Third party code refers to scripts that are loaded on sites that make connections to third party sites. The extension divides these sources into advertising, analytics, social and content, and indicates the total number of these connections in its toolbar icon.

A click on a server listed here opens the website of the server in the browser. The extension furthermore blocks scripts of the three popular social networking and messaging sites Facebook, Google and Twitter. You can allow connections with a single click which turns the green icon into a gray one indicating that connections are allowed. A different color scheme, red for blocked connections, green for allowed and gray for unknown connections would make more sense in my opinion. 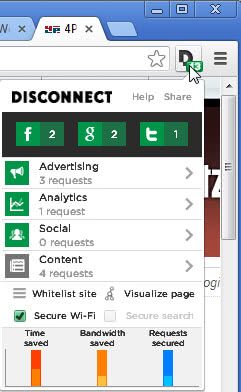 The extension highlights the time saved to load the website, the bandwidth saved and the requests secured at the bottom of its screen. Just move the mouse cursor over any bar to see the improvement in percentage or total numbers.

You can whitelist your favorite website so that none of its connection attempts will be blocked, and it appears that the extension is remembering previous settings as well so that you can also only enable select connections or scripts and not all of them. The visualize page feature is interesting as well. 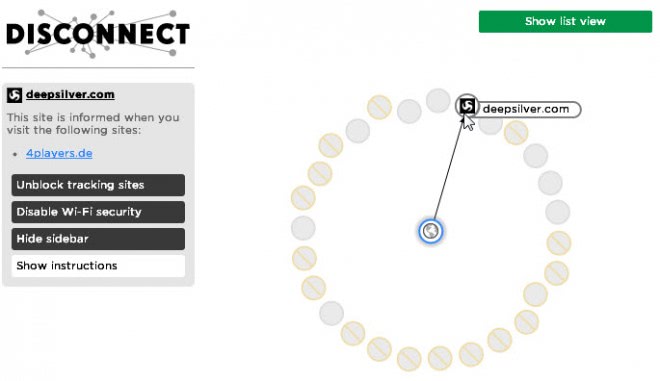 You can change the view mode to a list instead which lists all the connections a site tried to make. Connections that were not made are shown are crossed out and shown in red so that you know exactly which connections have been made and which have not been made.

The developers have added several improvements in the new version. It now recognizes more than 2000 different third parties and not only major sites like the previous version did. It is also highlighting the benefit of using the extension now, and offers a more granular approach to blocking or allowing scripts to be loaded on a site. Disconnect 2 furthermore features a new Wi-Fi encrypt feature which forces https connections on select sites.

Note that some sites may not work at all or only partially if you do not enable some third party connections that it tries to make. Disconnect is not like NoScript, as it is only blocking major third parties from making connections and not all connections like NoScript does.