Google Keep, Google's newest pet project, is now available if you directly open this url in your web browser. It does not appear to be linked yet on Google Drive though, but that feature is likely to come in the future.

So what is Google Keep? It is a mix of the retired Google Notebook and Gmail Tasks. When you open the Keep website, you are greeted with the type note screen that you can use to add new notes to your online storage.

Each note consists of a title and text that you add to it, and optionally additional elements that you can add using the icons displayed in the note's footer area. Here you can assign a color to the note, upload images from your local system, or create a to do list or task list instead.

It does not seem possible right now to combine a note with a task list which is somewhat of a drawback. Existing notes can be archived which removes them from the main screen and makes them only available in the archived notes section of the site, or trashed which deletes them outright and removes them as well as a consequence.

A couple of things are missing, especially if you have been using Google Notebook previously. The former product allowed you to share notes with other users to enable a basic form of collaboration. That feature is missing completely from Google Keep at the time of writing. 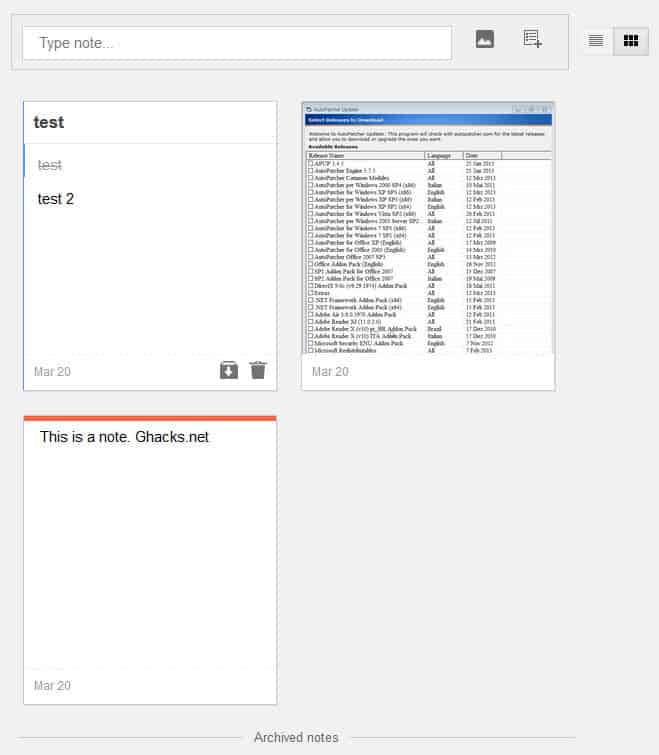 Google has released an official Android application for Keep that users of the product can make use of to create and manage notes and tasks on the go.  The Android version supports a couple of features that the web-based version does not support. You can create voice notes that are transcribed automatically for instance or take notes right from the homescreen using widgets. Note that you need at least Android 4.0 to run Google Keep on your system.

Google Keep appears to be a very basic product right now, not comparable in any way to established products such as Evernote. It is likely that the product will be improved in the future to add missing functionality to it. I for one won't be using it at all, as mentioned in this previous article.

What's your take on Google Keep? Will you be using the service?