TabCloud was listed as Alan's number one extension for Google Chrome for 2012 and I always wanted to take a closer look at the extension to write a review of it here on Ghacks. The extension, available for Firefox and Google Chrome, as well as Android, can be used to save current session information to the cloud to load them later on again on the same device or another system.

It serves two main purposes if you ask me. First, it can save sessions so that you can restore them on the local system. While you can configure the browser you are using to load the websites you had open the last time you used it, this sometimes may not work or you may want to open a session that was not the last. This can be easily done with TabCloud as it can save multiple sessions for you. The Firefox extension can be downloaded here.

Second, it synchronizes all sessions with the cloud, so that you can access them on any device the extension is installed on as well. Think at work and at home, or a desktop PC and laptop, or whatever combination of devices you are using.

The extension adds an icon to the browser's address bar that you can click on to load and save sessions. To do so, it is required that you log in to your Google Account and the Google App engine to store the data. 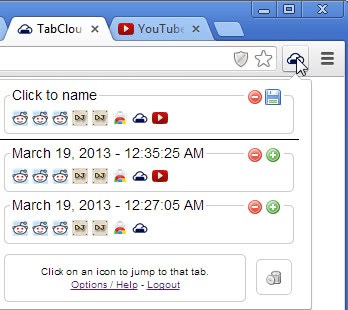 Once logged in, you can save the current session, delete a previously saved session, or load one of those sessions instead. This alone is pretty useful but there are a couple of extras that you can make use of. Sometimes, you may only need to restore a single tab, which can be done easily with a middle-click (or Ctrl-click) on that tab in the interface. Each saved tab is depicted with the website's favicon to save space. This works well most of the time, but you may run into troubles if you have multiple pages of the same domain open in the browser.

You can drag tabs between sessions in Chrome, even between those that are not open right now. That's an excellent option to add another website to a session that you have created for a specific task. It is furthermore possible to name sessions, which can be interesting for that purpose as well, think work, research, business or entertainment groups.

The Firefox extension did not work properly during tests, it simply would not let me log in even though it stated that I logged in successfully.

Here is a video that demonstrates the extensions capabilities.

TabCloud is a useful extension for a number of usage scenarios. You can use it as backup for your sessions if Chrome or Firefox sometimes do not restore them properly. You can also use it to sync browsing sessions between different devices and browsers, or save specific sets of websites as themed groups.

It could use a couple of features though, like an optional auto-expiration date, options to password protect the data, or the option to update previously saved windows. Some of those features seem to be on the developer's to do list.