One of the first apps to land in Windows Store that allowed you to unpack archives was WinZip, and like the desktop application it was not available free of charge. What users received in return for the $7.99 they had to pay to purchase the application? Support for the creation and extraction of zip and zipx archives, options to save and load archives from and to the PC, Dropbox, SkyDrive and Google Drive. That's about it and it seems that many users felt that it was not enough to justify the price, especially since Windows 8 supports the extraction and creation of zip archives natively ( ).

There was simply no reason for Windows 8 or Windows 8 Pro users to pay for the app as they could easily download and install a superior alternative such as 7-Zip. Windows RT users on the other hand have alternatives available in the form of apps like MetroZipFiles or Unpacker which are both free and offer at least a similar functionality.

The WinZip application for Windows 8 has been turned into a free to download and use app as of today. While it is not clear why the company made the decision to remove the price tag from the app, it is likely that the lukewarm reception has something to do with it. 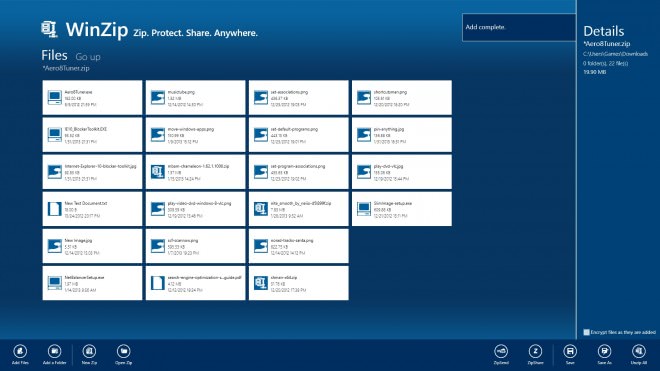 The majority of reviewers complained about the lack of functionality the app provided. This included that it only supports zip and zipx archives and no other archive format, and that the application in general did not really offer that much more than the integrated zip tool of Windows.

So what can you use the application for? When you start it up you are presented with a nearly blank interface. A right-click displays the bottom toolbar that you can use to add files or folders to a new archive you want to create, or load archives that you want to extract on the system (from the PC, Dropbox, SkyDrive or Google Drive).

Here you can also use ZipSend and ZipShare, two native features to send archives or share files on Twitter, Facebook or LinkedIn, or to save contents to the local system.

It is definitely one of the better free apps. Especially the choice of colors, fonts and the overall appeal and design needs to be mentioned in this regard. As a free application, it may be worth the installation, especially for users on Windows RT who have to work with zip archives regularly.

Update: Turns out that the Winzip app is not free after all. It appears that it is free to try for 15 days and then available for a subscription fee of $7.99 per year. Windows Store does not appear to differentiate between the two offer types.

Previous Post: « Pin Anything to Windows 8's start page
Next Post: You can still buy Windows 8 for a discount »