Some files and settings of the Windows 8 operating system get automatically backed up to SkyDrive if you are signing in with a Microsoft Account. The operating system furthermore uses system restore which in itself is a form of backup, and File History, a feature that needs to be enabled before it can be used.

SlimImage is a new software program from Slimware Utilities, the company responsible for programs such as SlimCleaner, SlimCom,puter or SlimDriver which are all freely available for Windows. The program is only compatible with Windows 8, and while you won't receive an error message during installation, you will be notified that it will only run on Windows 8 when you try to run it on an earlier version of Windows. Keep in mind that the program is not compatible with Windows RT devices like Microsoft's Surface tablet right now.

When you run the program you are presented with options to enable backups for documents and files, or Windows and applications. The first option enables you to create file and document backups.A wizard walks you through the steps of setting it up. After you have selected the backup option from the menu you are asked to pick a backup target. This can be a local drive - but not the main hard drive partition - or a network drive.

A couple of customization options are available, to change the backup frequency from once per hour for instance, to define how long you want old versions to be kept on the system - forever is the default - or which folders you want included in the backup. The program by default backs up libraries and contacts only. If you have a different folder with important documents or files add it to the list using the settings menu. 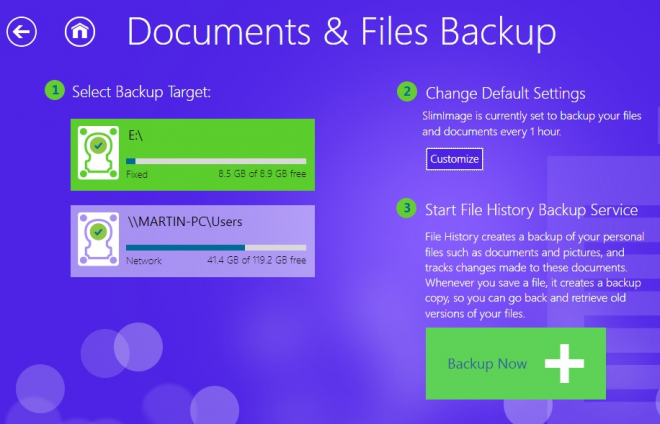 If you have a particularly large audio or video library folders you may want to exclude them from the backup to save storage space on the backup drive. The program seems to use the operating system's File History feature for the backups. What this means is that it basically provides users with a different interface for the feature. You can verify that this is the case by loading the File History control panel afterwards. The feature was disabled on my test system and after running the backup software, it was enabled.

The second feature offers to create a system snapshot which appears to be a full backup of the Windows installation. The space required, 95.6 Gigabyte in my case, meant that I could not use the feature due to a lack of space on connected hard drives. Only Windows-related files are backed up during the process while documents and personal files are not. That's likely the reason why the program makes available the File and Documents backup option.

The big question here is if the program adds anything new in terms of functionality that the default Windows backup options do not offer. We have already established that the program's Files and Documents backup option is  a front end for the operating system's File History feature. The option that it adds on top that File History does not offer is the ability to add custom folders to the backup.

The Windows and applications backup options seems very similar to the Refresh your PC option of the system, only that it seems to include applications in the backup which the Windows feature does not.

It offers a couple of extra features like auto pruning of old backups, better schedule options or the ability to set a maximum number of snapshots for file versioning support. The program is free for now and the additional feature set that it makes available make it an interesting option for Windows 8 users who demand at least one of the features. If I could pick one, it would be the custom folder options for the operating system's File History feature.

The program is currently in beta and you can only download it from this page. Enter the code betanews on the page to download it to your Windows 8 system. (via Betanews)