I had high hopes for the Surface Pro ever since Microsoft announced that it would release the device a few months after the Windows 8 operating system. It was the device that I was looking for, running a full version of the operating system allowing me to run my legacy x86 programs on the device. The Full HD resolution, enough RAM, the form factor and the design with its integrated kickstand and attachable keyboard had me hooked.

I already had plans to replace my bulky laptop with the Surface Pro on business trips and other adventures, as its size and weight surely would make it ideal for that.

Several important factors, like price, availability and battery life, have been revealed by Microsoft yesterday. The Surface Pro will be available in January 2013. I had hopes that it would be available in December but a January release is not really something that is bothering me a lot.

But price, that is a different kind of beast. The Surface Pro starts at $899. For that, you get the 64 Gigabyte version and no keyboard. That's right, if you want a keyboard, and who would not want one considering that the alternative is the on-screen keyboard, you have to pay an extra $119 to $129 which makes the device cross the $1000 mark. The 128 Gigabyte model starts at $999, without keyboard as well, so that you end up at more than $1100 for it.

Even if price is not a issue here, there is another factor that may convince you that the device is not the one you are looking for. Microsoft General Manager Panos Panay yesterday revealed on Twitter that the battery life of the Surface Pro will "have approximately half the battery life of Surface RT". What this means is that you get 4 hours and 30 minutes, plus minus a couple of minutes, of battery life when you run a fully charged device. 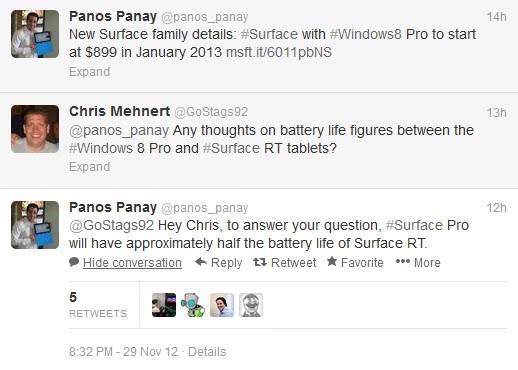 Does that sound like a truly mobile device that you can take with you on business trips? It won't last through a single work day without charging, and that's disappointing.

It is a disappointing development. I would not mind the price that much, as I have set my upper limit for the device to $1000, but the battery is the deciding factor that put me over the rail.

There are rumors that Microsoft is already preparing second generation Surface devices.

What about you? Has the revelation of price and battery life changed your perception of the Surface Pro? Which device would you recommend instead?