Microsoft is currently preparing to launch the Surface Pro in the next 1-2 months, after having shipped the Surface RT during the launch of the Windows 8 operating system at the end of October. The Surface Pro ships with Windows 8 Professional, a full desktop operating system that enables users to not only install Windows Store apps on the device but also desktop software. This, and better hardware, make it a viable solution for users who want to use the device in a professional work environment and situations where desktop software needs to be run.

Microsoft for some time now has been tight lipped about its product launches, so that essential information such as pricing or hardware are not revealed in advance. The company has not revealed Surface Pro pricing information yet, with estimates ranging from $599 to over $1000 for the device.

A German online shopping site has now listed both Surface Pro models including pricing information on its website. While not officially confirmed, it provides us with a first price range for both devices. According to the site, the Microsoft Surface Pro with 64 Gigabyte of storage will be available for â‚¬809 ($1033 or Â£646) while the larger 128 Gigabyte version for â‚¬909 ($1,161 or Â£726). In comparison, the Surface RT with 64 Gigabyte and touch-cover is available for â‚¬699 in the shop.

German pricing always includes the 19% VAT so that you may need to subtract the amount in the US to come up with a reasonable price. This would mean $836 for the Surface Pro with 64 Gigabyte, and $940 for the 128 Gigabyte Surface Pro model.

It is not clear if the device will ship with a touch or type cover, or if the covers need to be ordered separately. The product image on the site displays the Surface tablet with cover, while the Surface RT cover shots are displayed without a cover which could indicate that it ships with a cover included. 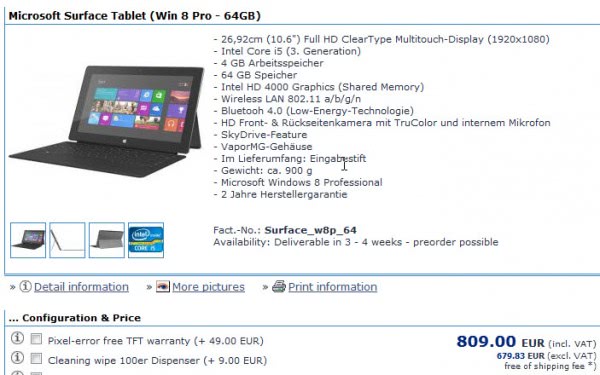 Both devices are available for preorder on the site and deliverable in 3-4 weeks indicating a launch at the end of November or beginning of December.

What's your take on the pricing? Will you get a Surface Pro if the prices prove to be true, or do you think that it is too expensive for what it is offering?

The integrated video card is disappointing, especially for users who require a powerful video processing unit. Gamers too will almost certainly run into issues here. While older and less taxing games, as well as Windows Store games should work fine on the system, it is certain that new and taxing games won't run well or at all on the device. (via Softpedia)