Google launched Chrome Remote Desktop about a year ago for the Chrome web browser and Chrome OS to add remote desktop features to both systems. It enables Chrome users to remote access another computer, their own or a third party computer, through the Chrome web browser.Â  It can be used for tech support, say when your parents once again experience issues with their computer, or to access data on another computer that is in another physical location.

Chrome Remote Desktop has now been released as a final version by Google after a year of tweaking and improvements. The application is cross-platform and works as long as Chrome is installed on the system. Remote assistance capabilities are available for Windows, Mac and Linux, while desktop access is only available for Windows Vista and Mac OS X 10.6 or newer versions of the operating systems.

To get started, install the application from the Chrome Web Store on at least one system running the Google Chrome web browser or Chrome OS. If you want to remote access your own computer systems, make sure the app is installed on all systems that you want to access this way. Note that you need to sign in to your Google account to install the app, that the app has a size of about 20 Megabytes, and that you need to give it certain rights before you can use it.

Whenever you start the app afterwards, the following screen will pop up. 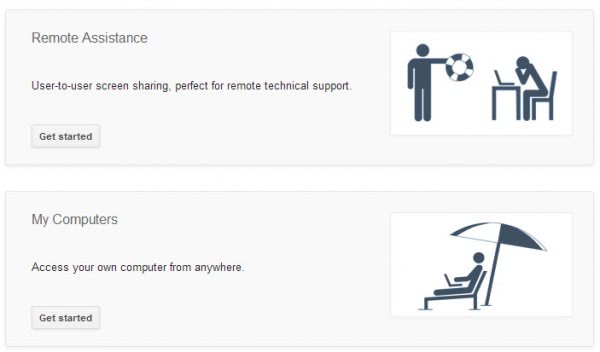 Here you need to select whether you want to access one of your own computers where Chrome Remote Desktop is running on, or use it for remote assistance instead which is ideal if you want someone else to take a look at your computer, for instance for tech support.

The final version of Chrome Remote Desktop brings along several new features which should come in handy. This includes the ability to copy and paste between local and remote computer systems or the streaming of audio from one computer to another. The latter is currently only available on Windows systems.

Chrome Remote Desktop is an alternative to popular desktop applications like TeamViewer. It is in some regards limited though, as it requires Chrome to be installed on the computer while TeamViewer does not have that restriction.

Previous Post: « Chrome: Adblock Plus update lets some ads slip through now
Next Post: « Use Click-free Browsing for Chrome if you are tired of clicking