You are a fan of the new start screen and Charms Bar that Microsoft is introducing in Windows 8 but can't switch to Windows 8 for whatever reason right now? WinMetro is a new program developed by IOBit that is transforming traditional Windows systems to look and feel more like Windows 8.

So how does it work? You install Win Metro on your system like any other application. Good news is that it does not modify or hack core system files to make its functionality available on the operating system. You can launch Win Metro right away which loads a screen that looks similar to Windows 8's start screen interface. Here you find tiles that link to features such as Photos, the Weather or Finance information, as well as shortcuts to apps that you use frequently on the system. 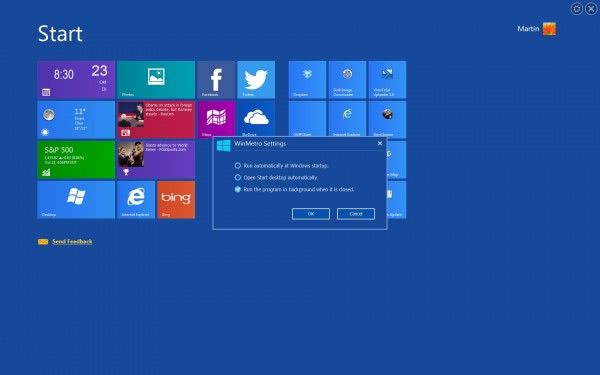 The tiles, with the exception of the desktop tile that switches to the classic desktop, run much like their Windows 8 counterparts in full screen here. 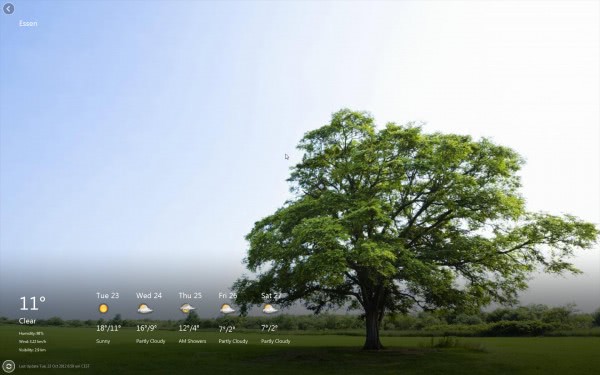 Some apps worked just fine, like the weather app you see above, while others, Bing for example, showed only a loading symbol and nothing else. WinMetro is a beta release and it shows at times that it needs a bit of work before the release of the full version. The remaining shortcuts open programs on the classic desktop.

You can display the Charms Bar with the shortcut Windows-C both while in the start screen interface and on the classic desktop. Here you get options to switch to the start screen, perform a search or display the settings of the WinMetro application.

The search is not instant but fast enough, provided that you have indexed the location you search using Windows Search. You may notice slow downs though when the drive is searched for files, and I'd recommend to select a different location than the root of the drive to search to avoid this.

The Charms Bar opens up as well when you move the mouse cursor to the lower right corner of the screen (but not the upper).

The Beta version of WinMetro has a few quirks right now which I'd like to address below:

WinMetro shows lots of promise for a beta application, and if the developers manage to resolve the few quirks left, it could be an attractive solution for Windows XP, Vista or Windows 7 users who like to work with the start screen that Windows 8 offers. (via Mike)

Update: The latest WinMetro 2.0 Beta adds the following new or improved features to the program: