Computer security and anti-virus company Comodo have rolled out the first beta version of their Internet Security 2013 suite of utilities. Â The latest set of utilities contains an anti-virus scanner, firewall, sandbox technology and all of the other apps included in past versions. Â While there aren't any new apps included in the suite, there is quite a bit of new technology that will bring the software into the modern age of computing, making it ready for the new mobile generation.

The user interface has been completely redesigned with a more colorful look and touch features that give a nod to the upcoming Windows 8 and the move to tablets. Â Improvements have also been made to the sandboxing feature in Comodo. Â Sandboxing, if you aren't familiar, locks an app out of the rest of your operating system, preventing it from accessing your PC in the event something goes wrong. The 2013 version introduces a Virtual Kiosk which basically offers a virtual environment for Internet use and apps.

There is a Registry tweak for a full virtualization mode:

This mode makes sure that "unknown" applications are automatically sandboxed on the system.Â  The 2013 app utilizes the Kill Switch andÂ Cleaning Essentials toÂ help identify dubious processes attempting to execute on your system. 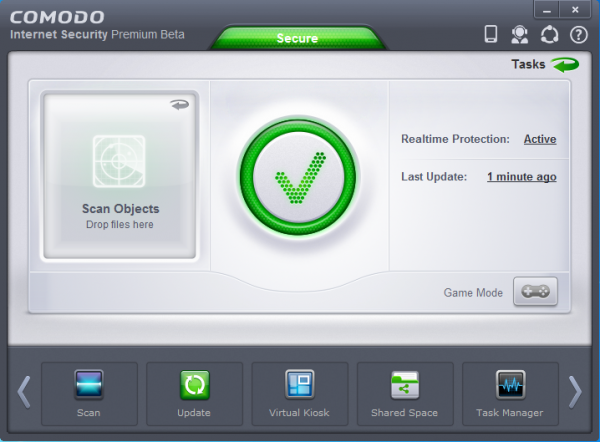 If you are moving to Windows 8 then you may want to pass on any third-party security software since the new Microsoft operating system comes with it's own built-in security, which uses Windows Defender. Â If you are sticking with Windows 7, or feel the need for additional protection, then you will have some options, like Comodo, and the other big names in the field such as Norton, McAfee, Kaspersky and many others, as well as free solutions from companies like AVG and Avast.

The beta is currently available in the beta forum which is only accessible by registered users. You probably find it as well on various download portals.

Here is a good video walkthrough of the new Comodo Internet Security 6.0 Beta version (which is the 2013 version).