The majority of web browser benchmarks are created by companies and organizations that develop browsers. Mozilla has its Kraken benchmark, Google its Octane benchmark, which many web developers believe are not as impartial as they should be. To make matters worse, third party benchmarks such as the SunSpider JavaScript benchmark are only benchmarking a browser's JavaScript performance and not other important browser technologies and features that matter.

The new independent browser benchmark RoboHornet tries to resolve all those issues. Committee members include developers and representatives of companies such as Google, Mozilla, Microsoft or Facebook. That's not the only difference to current browser benchmarks. Unlike others, it takes changes in technology use into account. The weighting of the benchmark changes over time because of this, with the consequence that you can't necessarily compare past benchmark results to recent results.

The benchmark runs a series of test that take minutes to complete. You can customize the test if you want by unchecking certain parts of the test before you click on the run button to start it. The benchmark spawns a popup window which all web browsers will block by default. You should see a notification on the screen that provides you with an option to allow popups on the site. Opera users need to change the popup behavior in the settings before the test runs through without issues.

The test result shows how the browser compares to stable browsers on average hardware. If the score is above 100, it is faster than average browsers, a score below 100 on the other hand indicates that it is slower than the average. 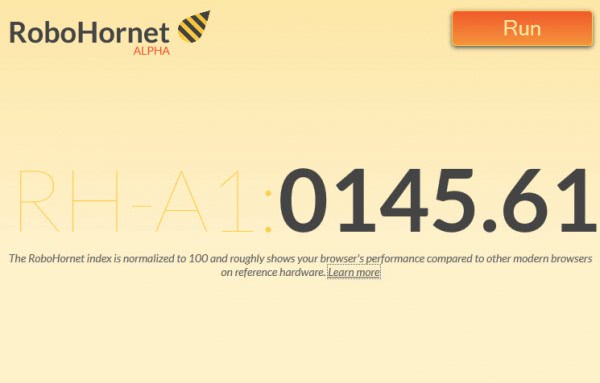 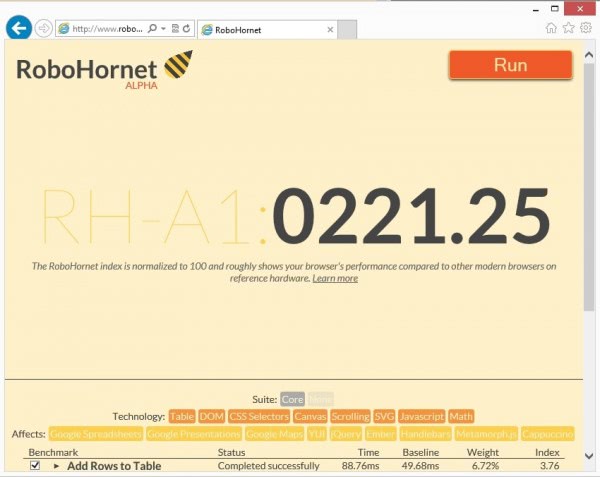 Internet Explorer 10's performance may come as a surprise to many. What's even more puzzling is Chrome's performance in the test. Especially the performance on Windows 8, where it is performing worst of the four tested browsers seems to contradict the public perception that the browser is the fastest when it comes to benchmarks. It took Chrome considerable longer to complete the SVG resize part of the benchmark, which may explain why its score is what it is right now. It would be interesting to see if this is related to Chrome Dev, my computer, or Chrome in general.

Have you run the benchmark yet? If you did, which browser came up first?