Microsoft has published a security advisory today that is informing system administrators and end users about a new 0-day vulnerability affecting Internet Explorer 6, 7, 8 and 9 but not IE 10. The vulnerability is already actively exploited on the Internet which makes it a pressing matter for all Windows users who work with Internet Explorer.

The advisory itself does not reveal much about the vulnerability other than that its a remote code execution vulnerability that is giving the attacker the same rights as the logged in user if exploited successfully. Internet Explorer users need to actively visit a website or open an HTML page in the browser for the attack to be successful. A specially prepared web page or hacked website are two possible scenarios.

Internet Explorer on Windows Server versions runs in restricted mode which mitigates the vulnerability. The same is true for Microsoft email clients such as Microsoft Outlook, as HTML emails are also opened in the restricted zone. HTML links on the other hand that open in Internet Explorer are still dangerous.

EMET, the Enhanced Mitigation Experience Toolkit, can be used to mitigate the vulnerability. You need to add Internet Explorer once you have installed the application. To do that you can either load one of the default configuration files or add iexplore.exe manually to the program. 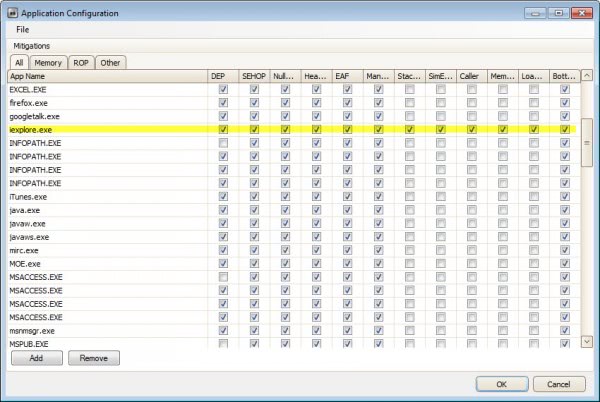 You find detailed instructions on how to do that on the security advisory page. I have been running EMET on my systems ever since I discovered the application and have not experienced any issues doing so. Great program, definitely recommended.

In other news: while Internet Explorer 10 is not listed as vulnerable, it is still running a vulnerable Flash version. (thanks Ilev)