Many people use Google's Chrome web browser for surfing the Internet because it's fast, stable and generally reliable.  However, quite  a few users have a problem with Adobe's Shockwave Flash plugin for the browser.

It's likely not a Google problem, but an Adobe one.  The software maker has dealt with numerous security issues with Flash, Reader and their other apps.  This isn't a security hole, but simply a problem with the extension crashing and causing Chrome to have problems of unresponsiveness.

Generally speaking, what users experience is the following: a web page or tab freezes in Chrome and that is followed by a message under the menu bar stating that "Shockwave Flash has crashed".  This can also be followed by a popup from Chrome asking if you want to close "unresponsive tabs".  It's annoying and slows the browser to a crawl.

Fortunately, there is a fix for this common problem that is fairly simple for even a beginner user to handle.  It may not solve all of Adobe's woes, but it should at least stop the plugin crash that ruins so many browsing experiences.

Update: Google changed how plugins are managed in the Chrome browser. The chrome://plugins page is no longer available and the method described below does not work anymore because of it and because Google added Flash to Chrome internally. 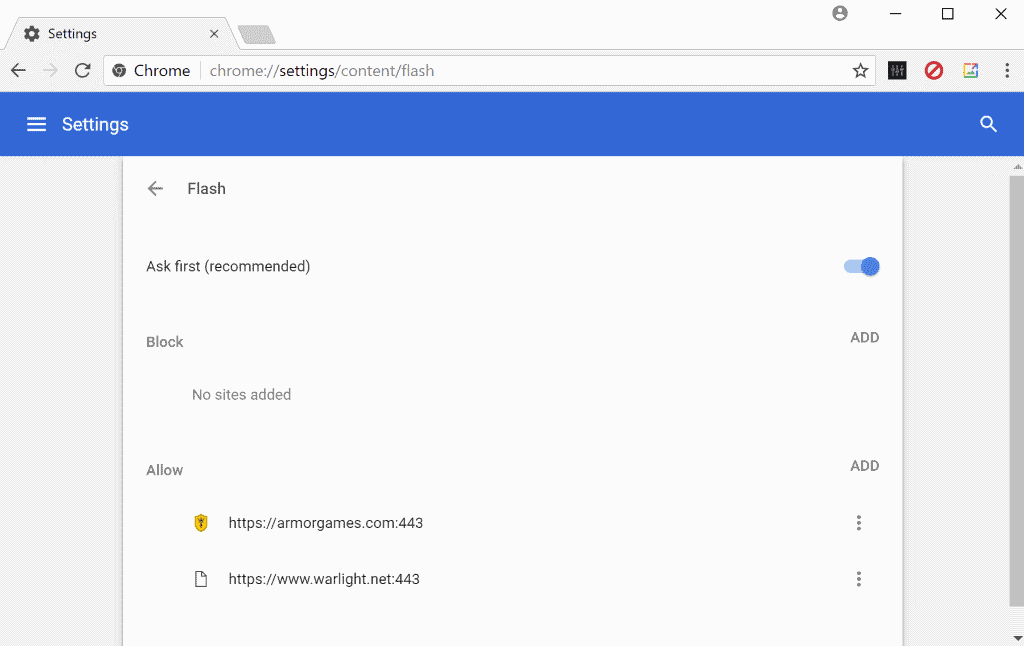 You can manage Flash functionality by loading chrome://settings/content in the browser and selecting Flash from the listing. There you may disable Flash altogether, change its default status, or whitelist or blacklist it. End

To get started, open Chrome and click in the address bar.  Type "chrome:plugins" to open a page that will display all of the installed plugins.  Scroll down to find the Flash plugin and pay attention to if there is more than one version installed.  If you notice multiple versions then this is causing your problems.

If you find multiple versions of the plugin installed then click the "+" toggle to expand the entries for the plugin.  Now, disable Chrome’s internal Flash installation which is located in Chrome’s AppData folder.  You will need to restart the browser for the change to take effect.

This may not fix every Shockwave Flash problem, and some of you may find only one version installed.  Hopefully, this will fix the issue for the vast majority of users.

Article Name
Fix the Chrome Shockwave Flash Plugin Problem
Description
Many people use Google's Chrome web browser for surfing the Internet because it's fast, stable and generally reliable. However, quite a few users have a problem with Adobe's Shockwave Flash plugin for the browser.
Author
Alan Buckingham
Publisher
Ghacks Technology News
Logo