When Microsoft rolled out the Windows Store with the release of the Consumer Preview version of the operating system there were only a few apps available, and many of them were actually made by the Redmond company. Â Now, with the Release Preview being widely used, and the RTM (release to manufacturers) version all set and available as a trial, the store has been growing by leaps and bounds.

There were early adopters like the Kindle app from Amazon, the popular game Cut the Rope and music giants like TuneIn Radio (which has since disappeared from the Store for unknown reasons), plus Microsoft apps like SkyDrive. Â Now almost every major brand is flocking to the market, such as the popular cloud storage service Box, AccuWeather, USA Today and many others. Â The Store has quickly grown to over 1,500 apps, after just reaching 1,000 only about a week ago. 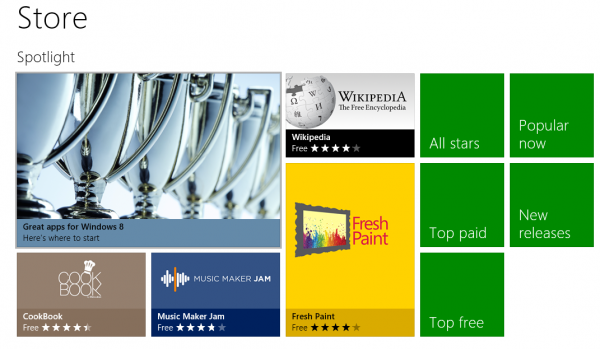 When the software maker officially launches their new OS on October 26th there are expected to be quite a few prominent apps that will come along for the debut. Â While nothing has officially been said, services like Facebook and Twitter are widely expected to be released with the launch. Â Chrome, currently with a beta version for the Windows 8 Start screen, will also likely launch then, as will Mozilla's Firefox web browser.

What else can users expect in the Windows Store when the big day rolls around? Â Will we see other browsers like Safari and Opera? Â Other cloud services like Dropbox? Â Social networks like Instagram, Pinterest and the like? Â None of these have madeÂ officialÂ announcements, but certainly they will have a vested interest,Â especiallyÂ given the tablet interface built into the next-generation operating system.

If you haven't yet checked out Windows 8, the Release Preview is still available for free download and will continue to work until early 2013.

Previous Post: « How to restore individual files from System Restore points
Next Post: « Time to malware-scan new PCs before first use