The Aurora channel of Firefox has just been updated to version 17. I'm always using the opportunity to look at the changes, improvements and feature additions. A change log has not been posted yet, which means that the the following list is likely not complete at this point in time.

It also needs to be noted that some features that Mozilla plans to integrate into Firefox 17 are currently not included in the Aurora release. It is likely however that this will change in the coming weeks.

Firefox 16 should download the update automatically and install it on the next start of the browser so that it is displayed as Firefox 17 the next time you start it up. You can alternatively click on Firefox > Help > About Firefox / Aurora to check for the update manually.

Mozilla plans to improve the display of the browser's location bar results. Some of the restyling has already landed in Firefox 16, while larger favicons will land in Firefox 17 if development progresses normally. Changes include the removal of the scrollbar (without changing the number of results) which currently is displayed after six suggestions are displayed to scroll to the remaining suggestions. You can follow the progress that Mozilla makes here.

Social integration is another feature that Mozilla plans to land in Firefox 17. I have reviewed the social feature of Firefox two weeks ago and I suggest you check out the article for an overview. Mozilla plans to add options to the browser to allow users to connect to various social networking sites directly. This then includes integration of notifications, contacts, messages, chat options as well as options to share web contents effortlessly on the social networking sites the user is a registered member of. 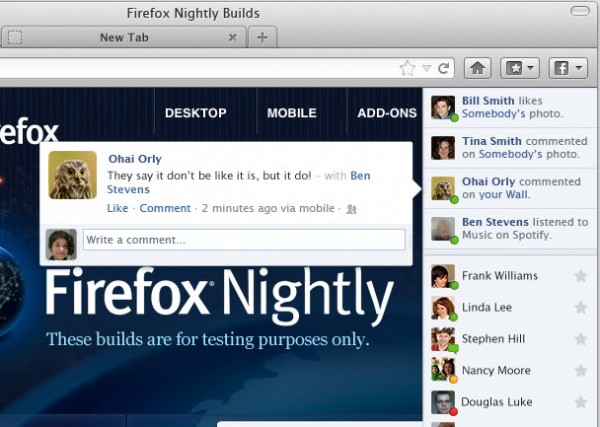 It currently appears as if the features only become available in the browser if you connect at least one social networking account. Things may change though and this is something that I will monitor closely as I do not really need it included in the browser and hope that it remains an optional feature even when it is released.

Firefox 17 will also be the version of the browser were add-on security will be improved in. While that is a good thing, it may affect the compatibility of some add-ons that may not work in the version anymore unless someone fixes the incompatibility first.

And that's it for now. I'll update the article with new information once they become available.

Update: Mozilla has posted the Aurora changelog. It lists the following changes, additions and fixes:

The list is not complete, and some of the listed features have not been implemented yet.

Previous Post: « How to disable Java in your web browser
Next Post: « Mozilla pulls Firefox Home from Apple's app store