Our first review of RogueKiller dates back to January 2012. Back then the security app shipped with a Dos-like interface that you could only control with your keyboard. Today's release of RogueKiller 8.0 comes with a new and improved graphical user interface that makes the program more appealing and easier to work with.

RogueKiller scans various important areas of the operating system for rogue files, processes and settings. Once you have installed the program on your system, you can fire it up right away to scan your system for traces of malicious activities.

The first thing that you may want to do is click on scan to have RogueKiller scan the system. This takes less than a minute to complete and concentrates on core areas of the system only. What this means is that RogueKiller is not an alternative for resident antivirus software that can scan all files of the Windows installlation. It is rather a program that you run from time to time to make sure nothing slipped past the defenses that are on and running all the time. 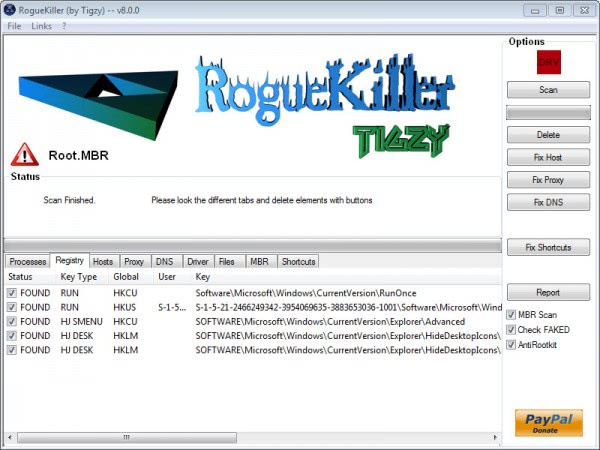 Potentially malicious results are displayed in the lower half of the interface. Here you need to go through all tabs to verify the findings before you click on delete to remove the selected items from the system. If nothing's displayed in a tab, nothing malicious has been found.

It is highly recommended to check each and every item carefully before you click on delete as you may very well remove false positives from the system otherwise. The root.MBR warning that I received for instance was not caused by malicious software that modified the master boot record of the system, but by the encryption software DiskCryptor which I installed on the system to protect the operating system from being loaded by unauthorized third parties.

As far as fixing the host file, proxy settings and DNS settings go, you use the buttons on the right to fix issues identified by the program. To fix the MBR, you switch to the MBR tab and use the menu there to fix it.

Please note that the program website is entirely in French. I suggest you use a translation service like Bing Translator if you do not speak French.