Microsoft today has released a big update for its SkyDrive service. Regulars know that SkyDrive is Microsoft's cloud hosting and file management service that is offering 25 Gigabytes of storage to old users of the service, and 7 Gigabytes to new users who have signed up for it recently. What more. SkyDrive will be an integral part of Microsoft's upcoming flagship products Windows 8 and Office 2013, allowing users to synchronize profiles with the Internet, save documents and other data to the cloud and access the data on other computer systems.

One part of the update is the SkyDrive.com website that will roll out for all users of the service over the next 24 hours. Users of the new outlook.com email service will notice several similarities between both designs. The page uses the same three-pane layout that the web email service uses. At the top is the main toolbar with core account and service related options. On the left is the sidebar menu with links to folders, connected devices and storage information, and on the right the large tile based interface that is displaying files and other information.

Users who prefer the old details view can switch to it with a single click on the details icon in the upper right corner of the screen. Details view is the default view for the recent docs and shared folders as well.

Microsoft has made the search instant, which basically means that the file contents are updated automatically once you start typing the first characters in the search field on the SkyDrive website.

The toolbar that you see at the top is now contextual, which means that you may see additional actions depending on your location on the site. If you are viewing the contents of a folder, you may for instance see a Folder actions menu that allows you to download, delete or move that folder.

Photos hosted on SkyDrive can now be rearranged via drag and drop. The sorting of files has been improved so that you can now save sort orders per folder on SkyDrive.

Users of the SkyDrive application for Windows or OS X benefit from a number of new features that will roll out over the course of the week. The two core improvements here are faster photo uploads thanks a streamlined upload path and a reduction in cpu cycles when the SkyDrive app looks for changes on the local system.

Microsoft also hinted that a selective sync feature will come to SkyDrive in the near future. It is not included in this update but it is in the works.

The big news on the mobile front is the announcement that skyDrive for Android will launch in the next couple of weeks. 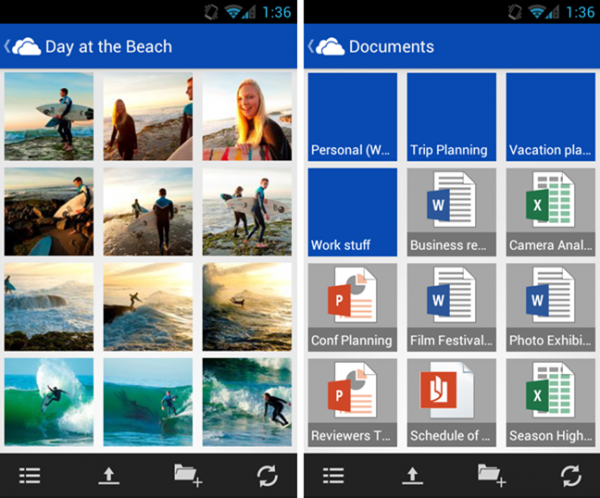 It will be feature-wise similar to the mobile apps for Windows Phone and iOS, so that you can use it to browse SkyDrive files, upload files and share files directly from your Android device.

Especially Android device owners will be glad to hear that Microsoft will launch an app for their device in the coming weeks.Â  The update improves Skydrive for all of its users, regardless of how they use the service. Less cpu cycles and faster photo uploads on the desktop, and the new SkyDrive interface on the web with improved search and better manageability. It seems that Microsoft has big plans for the service, and it is likely that this is just the beginning of many updates to come.