That's a lot for just one operating system, and definitely more than Windows Vista or Windows 7 users had to cope with, despite the fact that their operating systems shipped with additional editions that Microsoft cut down under Windows 8.

Windows 8 - This is the name of the successor of Windows 7. To make matters complicated, it is also one of the editions of the Windows 8 operating system that is available to end-users. The edition is one of two - the other is Windows 8 Pro - that end-users can purchase for their PCs either as full copies or upgrades.

The core differences between Windows 8 and Windows 8 Pro are the following features that are only included in the Pro version of the operating system: Bitlocker and Bitlocker To Go, Boot from VHD, Client Hyper-V, Domain Join, Encrypting file system, Group Policy, Remote desktop (host). The majority of features not included in the Windows 8 edition are for professional users.

Windows 8 is also rumored to be a possible replacement term for the Metro design language used in the Windows 8 operating system and other Microsoft products.

Windows 8 Pro - The professional retail channel version of the Windows 8 operating system. It ships with additional features, listed above, that especially businesses and It professionals need for work. This is the version that Windows XP, Vista or Windows 7 users can upgrade to when the operating system comes out.

Windows 8 RT - This edition of Windows 8 is not available in retail. It ships preinstalled on ARM-based devices, and is in many regards fundamentally different from the desktop editions Windows 8, Windows 8 Pro and Windows 8 Enterprise. Probably the biggest difference is that you can't run desktop software on it. Microsoft will make available specialized versions of Microsoft Office and Internet Explorer for the edition, but the remaining software will consist only of Modern UI apps.

The edition lacks features like Storage Spaces, Windows Media Player as well as all Pro-exclusive features that the basic Windows 8 edition also lacks.

Metro - Metro is a design language created by Microsoft for Windows Phone 7. It has since been used in other Microsoft products including the Windows 8 operating system. 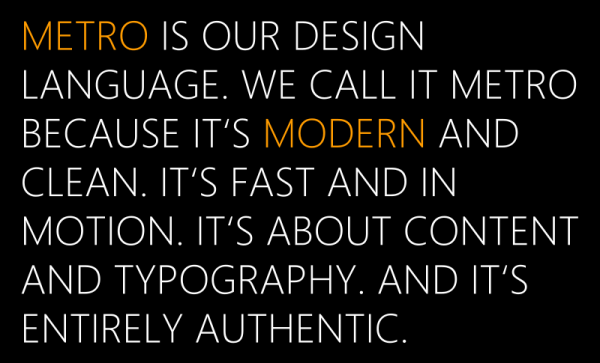 In August 2012, Microsoft started to contact developers, customers and employees to stop using the Metro name. It is generally assumed that this had something to do with the Metro trademark of German company Metro AG. Microsoft has been tight lipped since, and rumors spread that Microsoft was planning to use Windows 8 or Modern UI as a replacement.

Metro apps - Metro-style apps or Metro apps are fundamentally different from desktop programs in many regards. They are available as free or commercial apps in the new Windows store and created with the new Windows Runtime platform using a variety of programming languages.Â  These apps have limited access to the operating system which limits them in term of functionality but makes it less likely that they will be abused for malicious purposes. The name change affects the terms as well, and it is likely that we will refer to these apps either as Windows 8 apps or Modern UI apps in the future.

Metro interface - The Windows 8 start page is usually referred to as the Metro interface. When you boot Windows 8 you boot into that startpage that displays a selection of Metro apps on it. Some of the tiles here are static, while others dynamic.

Basic examples of dynamic apps are news, a weather report, photos, finance related news or social updates from various networks. You can manage tiles on the start page. This includes deleting tiles you do not need, moving and grouping tiles, or adding new tiles, even to desktop apps.

It recently became known that Microsoft seems to have shut down all possibilities to boot directly to the desktop of the Windows 8 operating system.

One of the alleged new names for Metro. This has not yet been officially confirmed by Microsoft though.

I hope that this overview resolves any issues that you may have understanding Microsoft's terminology when it comes to the Windows 8 operating system. Please share your thoughts in the comments below. I'd also like to know if you think that a term is missing, so that I can add it to the list.

Previous Post: « No DVD playback on Windows 8? Try these free alternatives
Next Post: « Edit the Win-X menu in Windows 8 and 10