Stardock Multiplicity, control two computers with one mouse and keyboard

Up until now I have been using Microsoft's Mouse without Borders application to control my two desktop PCs with a single mouse and keyboard. Stardock has just released the second beta version of Multiplicity, a software designed for the very purpose.

The free version is limited to controlling one additional PC with the primary PC's keyboard and mouse. Mouse without Borders users will also notice that the free version of Multiplicity does not support features like copying and pasting files and folders between PCs or sharing clipboard entries. Here is a comparison chart that details the features that are only available in the commercial version of the application.

The commercial version lets you control up to nine PCs running the program from a main PC, while the free version only one additional PC. 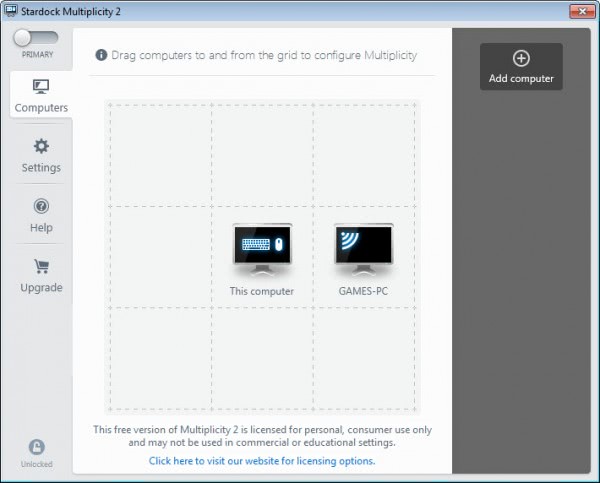 To set up Multiplicity on a secondary PC install the program on the computer and select secondary during installation. This displays the computer name and passcode that need to be entered on the primary PC to establish the connection. OnceÂ  aconnection has been established, the mouse and keyboard work on all connected systems.

Free users only have a handful of options besides controlling the different PC with a mouse and keyboard connected to the main PC. This includes options to switch between screens using hotkeys or the mouse, and to darken the current screen when another computer is controlled.

When it comes to options on the secondary PCs, you are left with limiting connections to the same subnet andÂ  non--routeable IP addresses.

The professional version offers two interesting features which deserve to be mentioned. Centralized audio shares audio between PCs so that you will receive notifications no matter on which PC they happen. The data that gets shared is encrypted by the program to protect it from network snooping and other attack forms.

Multiplicity is compatible with all 32-bit and 64-bit editions of the Windows operating system. Only 32-bit editions of Windows XP are supported. The centralized audio feature is only available in Vista or later.

The program suffers from being very limited in terms of functionality when compared to Mouse without Borders or Sharemouse.Â  If you need to control more than two computers or want to share a clipboard or drag and drop files then the free version program is not for your.

And while you could pay $39.99 for the commercial version to do away with the limitations, you get the majority of features in the free Mouse without Borders as well.

Previous Post: « How to add installed unpinned apps to Metro's startpage again
Next Post: « VLC 2.0.3 is now available for all supported operating systems