Adobe up until now has made available a version of Flash Player for the Android mobile operating system. Back in February, Adobe pushed out a notification that it stopped developing Flash for Android devices, and that Chrome for Android Beta would not support Flash contents because of this while the default Android browser would for some time to come.

Yesterday Adobe posted an update on Flash Player and Android, effectively announcing the end of Flash on the platform. According to the post, there are two types of Android devices running Flash currently. First certified devices which usually include a pre-loaded version of Flash Player or have integrated the technology as part of a system update, and uncertified devices where users actively downloaded Flash Player from Google Store to install it on their Android devices.

Starting with Android 4.1, there won't be any certified implementations of Flash Player on Android anymore, which basically means that Adobe won't cooperate with manufacturers to include Flash on their Android devices.

For uncertified devices, Flash Support will chuck along, but new Flash installations will not be available anymore come August 15. It looks as if Adobe will remove the option to install Flash Player on Google Play at that day for new devices that do not have Flash installed yet. Adobe will however push out updates to existing users of Flash via the store.

Android users running uncertified Android 4.0 or earlier devices have until August 15 to install Flash Player on their device if they want to use the technology on their devices. Users who update their phone to Android 4.1 should note that Flash Player is not certified for the operating system, and that "Flash Player may exhibit unpredictable behavior", whatever that means. Adobe notes that future Flash updates on Android 4.1 or newer devices won't work, and that users should uninstall Flash Player on devices that have been updated to the latest operating system version.

The Flash Player profile page on Google Play is notifying users about the change. 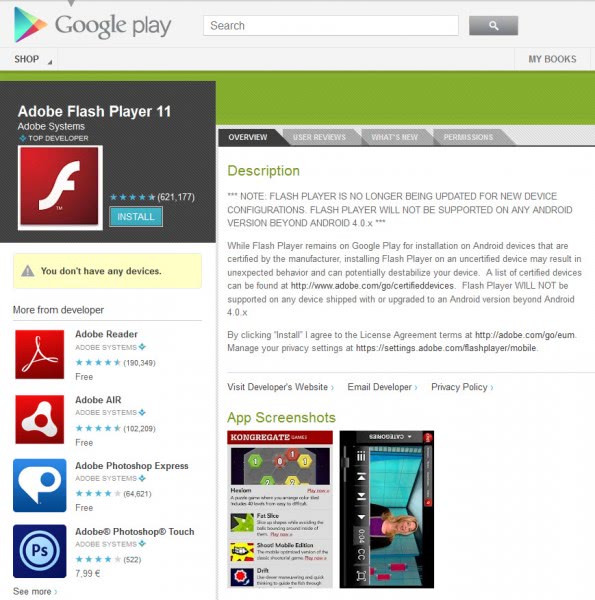 The release of Android 4.1 marks the end of Flash Player for Android. Support will be continued for some time for pre-4.1 devices, but that will run out eventually as well, at which time Flash will be officially dead on the Android platform. Android users who really want Flash need to make sure to install it before August 15 at which point Adobe will block new installations for regular Android devices.

Have you worked with Flash Player on Android? If so, what's your take on the move?