The developers of the Sleipnir web browser have released a new version of the browser for Windows and Macintosh operating systems. The new version of Sleipnir is now also supporting the WebKit engine that is also used by Google Chrome, Safari and others, next to the Internet Explorer engine that the browser is also supporting. WebKit support also means that it is now supporting Google Chrome extensions as well.

The new version of the browser introduces a new interesting feature that links the browser and smartphones together. For that, the Slepinir Linker app needs to be installed on the smartphone. Once that is out of the way, you can push information from the desktop to the smartphone. 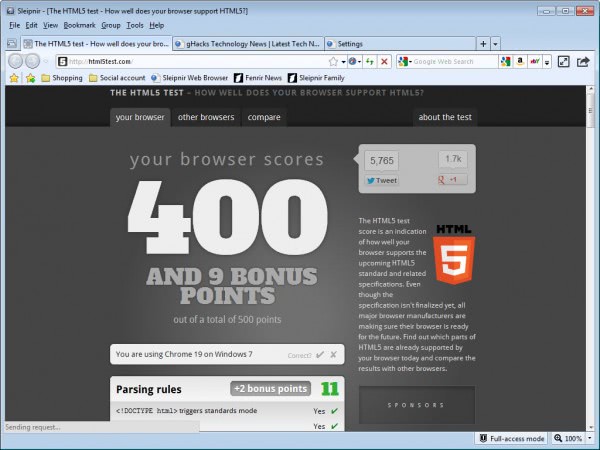 This includes the following options:

Take a look at the following demonstration video to see how this works.

This can be very handy in a number of situations as you can imagine, from pushing an address from your desktop to your phone before you get to the location, to simply sending a phone number that you want to call it so that you do not have to enter it manually.

The developers furthermore have added web app links to the browser, which you can use to share, save and preserve contents that you stumble upon on the Internet. Support are the usual services include Facebook, Twitter, Dropbox, SkyDrive, Evernote and Readability / Pocket. One interesting option is the ability to select multiple services to use all selected services at once. You could for instance share something on Facebook and Twitter, and at the same time send it to Instapaper and have it saved on Dropbox.

A quick test showed a few quirks here and there, but not as many issues as one would expect from a lesser known web browser. You can read the blog post announcing the new version here, or download Sleipnir directly from the developer website for Windows or Mac.