Mozilla is preparing to update all different Firefox channels in the coming days. We have already mentioned that the stable channel update is already available, while users of the beta and aurora channels still have to wait for the updates to be released to their channels. As always, I'm looking at the changes in the Aurora channel, and then at the same version again when it is released to the stable version. If you are a beta channel user, check out the Firefox 14 review instead dating back six weeks.

Some Windows users may experience faster startup times of the web browser thanks to improvements in this area. Mozilla basically wants to disable prefetch for Firefox on the system to speed up the browser's start. You can read up on some of the testing that was done and the discussion of the improvements. It needs to be noted that not every tested was noticing a startup speed improvement. Basically, Firefox users with lots of stuff going on should see performance improvements, while users on new or fast systems may not see much of a difference, if at all.

Another change that I have already talked about are the new in-content preferences, even though it is not clear yet if the feature will be enabled by default in Firefox 15 or a later version of the browser. I did notice issues with the feature during tests as extensions that added their own menu items to the dialog were not featured yet after enabling in-content preferences in the browser.

It also looks as if the final component of Firefox's Silent Upgrade feature will make its way into version 15 of the browser. We have talked about the feature previously, and I suggest you look at the article to find out what it is all about. In short, Mozilla attempts to reduce the time users have to wait until a browser update completes.Â  The last part of the feature are background updates, which basically means that the majority of the updates will be installed while Firefox is still running.

The new web apps feature had been implemented into Firefox 14 but was disabled there, and it appears that it will be enabled in Firefox 15. Mozilla describes web apps in the following way:

Web applications are universal applications. The run on any device. They use standard technology that works on desktop PCs, smartphones, and tablets. They can be installed on devices automatically when users authorize their devices, and are personalized so that users keep their preferences and data with them wherever they go.

Check out the overview here for additional details about the feature.

Firefox 15 may also be the first version of the browser that the new Social API gets tested in. Mozilla plans to deliver the feature as an add-on first before it will get integrated into the browser natively.Â  You can read more about the Social API and its integration into the browser here.

Web developers get a whole assortment of new tools and improvements. One of the new features is a command line for developers that developers need to activate currently before it becomes available. What they need to do is enter about:config into the address bar to set the devtools.toolbar.enabled preference to true. A restart of the browser enables the feature, which you can then activate with the shortcut Ctrl-Shift-V. 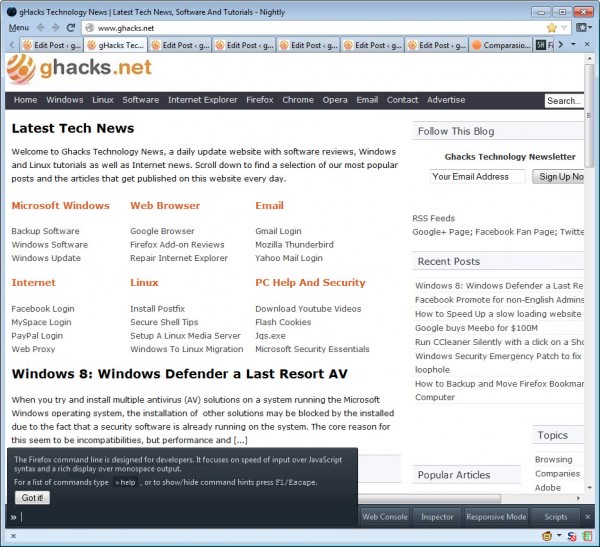 While designed with web developers in mind, Firefox users can also use the new command line feature to change preferences in the browser without opening the about:config dialog at all. Entering help will get you started.

The bar lists buttons on the right that developers can click on for additional functionalities like opening the web console or activating the Inspector.

Check out SÃ¶ren Netzschel's overview on the new features (via Bing Translate).

The update for Firefox Aurora to bring the version to 15 will be available shortly on this page and via the browser's internal updater.

Firefox Translations is going to be a game changer, if...

Previous Post: « How to Backup and Move Firefox Bookmarks to another Computer
Next Post: « Smart Referrer for Firefox Blocks Cross-Domain Referrers