Test if your system is infected with Flamer, The latest threat on the Internet - gHacks Tech News
ghacks.net

Test if your system is infected with Flamer, The latest threat on the Internet

You have probably already heard about Flamer, Flame or Flamy, as some antivirus companies call the malware. Flamer was only recently discovered, despite indicators that it has been spread on targeted systems at least since 2010. This alone highlights the danger of the tool, but that is not the only reason why some security companies call it the most sophisticated threat encountered on the Internet up to day.

Even if some experts disagree, it is definitely one of the most complex ones. If you compare the size of Flamer with Stuxnet, a related threat, you will notice that all of Flamer's modules have a size of about 20 Megabytes, while Stuxnet, which tool experts months to analyze, had only 500K of code. Not all of the 20 Megabytes are malware code on the other hand.

Kaspersky's Questions and Answers offers information about Flame, including how the malware spreads and infects computer systems. According to Kaspersky, Flame has two modules for infecting systems via USB sticks, but also the ability to replicate through local networks.

Flame has also only been identified on PC systems in several middle-eastern states including Iran, Israel, Palestine, Sudan, Syria, Lebanon, Saudi Arabia and Egypt. While it does not mean that PC systems in other countries are safe, it is highly probably that the malware has been designed for specific targets in the geographic region.

BitDefender has create a removal tool for the trojan that is detecting and removing Trojan.Flamer.A/B (that is how Bitdefender calls the malware). All you need to do is download the 32-bit or 64-bit version of the program from the BitDefender website, and run it afterwards on your system. 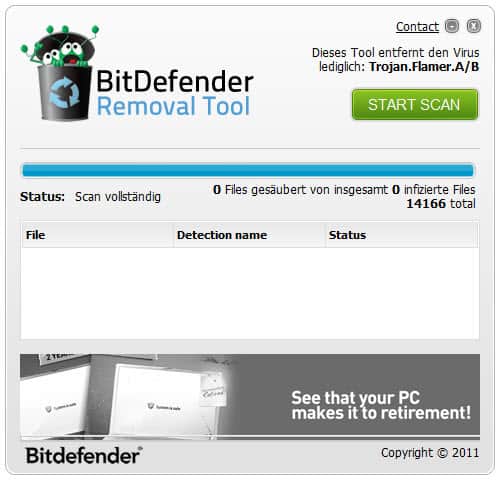 Just click the start scan button and wait for the scan to finish. The program is portable, and seems to automatically switch the interface language based on computer settings (excuse the German in the screenshot). It is definitely a good idea to run the tool once to make sure your computer is not infected by the malware. While unlikely, it is better to be safe than sorry. This is especially true if you are living in the middle eastern region.