Rogue applications are malware that try to fool the user in believing that they are legit programs. The most common form are rogue antivirus applications that are disguised as antivirus software, when in fact they are the exact opposite of that.Â  It can be quite difficulty to remove rogue applications once they have been installed on a computer system, as they are often protected from being simply uninstalled. Another issue that comes with many is that they make modifications to the system, with the Windows Registry as the main target.

The portable program can be launched right after it has been downloaded to the local system. Windows users do however need to make sure that the program is launched with elevated rights. 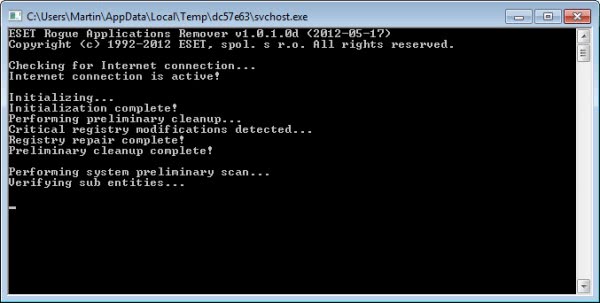 ESET Rogue Applications Remover's does not require an active Internet connection to scan a system for malware, but will be limited in its detection efficiency in this case.Â  Several command line switches are available that the program can be run with. This includes options to restore changes using the /r switch or /? to display the help file listing all supported command line switches.

You can download the 32-bit or 64-bit version of the rogue applications remover from the ESET website. The program itself can be started in safe mode or normal mode.

Probably the biggest issue at the time of writing is the lack of information when it comes to the program's cleaning abilities. It is for instance not clear which, or at least how many, different rogue applications it supports. Still, if you suspect your system to be infected with rogue malware, you may want to give ESET Rogue Applications Remover a try to scan your system for traces. (via JKWebTalks)