FeedDemon back in the days has been a popular RSS feed reader for the Windows operating system. Development slowed down considerably in recent years though, with no new updates released since 2010. Many users thought that the software had been abandoned by its developer, and some switched to other feed readers as a consequence.

FeedDemon 4.1 has been released yesterday, and while the new releases does not introduce any exciting new features, it refutes claims that the project has been abandoned. 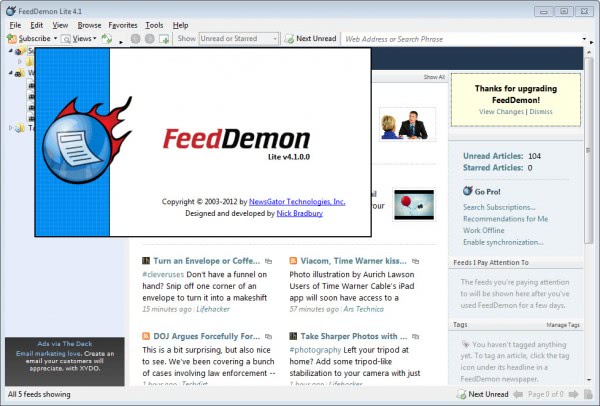 The release notes list about 30 fixes, additions and changes in FeedDemon 4.1. Here is a quick list of the most important ones:

Many of the changes fix issues with the program that have accumulated since the release of the last version. Existing FeedDemon users can simply install the new version which will automatically update the current program version to the new version. Another option is to click on Help > Check for new version to run the update check this way.

FeedBurner Lite, the free version of the program, is ad supported.Â  If you do not like that, I suggest you take a look at either RSSOWL (which is Java based) or the excellent Windows feed reader Greatnews.

Are you using a desktop or online feed reader?