I'm not very talented when it comes to working with image editors. I handle basic tasks well, for instance blurring information on screenshots or cropping images, but everything beyond that is just not something that I'm good at or can do at all. With that out of the way, lets take a look at what Gimp 2.8 brings to the table.

Probably the biggest change in the new Gimp version is the single-window mode, which attaches all the smaller editor windows to the primary window. Gimp's default multi-window mode displays editing options in their own window, which sometimes had the effect that resizing the screen or moving elements around hid some of those boxes, and that you had to search for them for a while before you got them back on the screen. 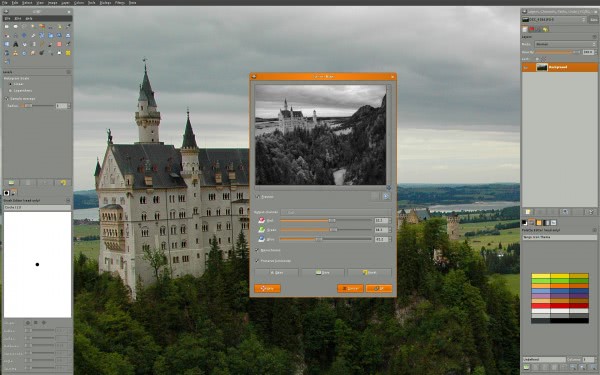 Another important change, at least for users working with layers in the program, is the new grouping option. Users can now organize layers into groups, which are then displayed in a tree-like structure in the application.

Gimp 2.8 furthermore introduces on-canvas text editing, making the process work more like it does in other image editors. Gimp users not only get to customize the texts font family, style and size, but also control over baseline offset and kerning of the text.

You find the source code of Gimp 2.8 already listed on the official download page on the website. Windows and Mac users need to wait a bit longer until the final versions for their operating systems are compiled and made available on the same download page.