About a month ago I highlighted what Mozilla had in store for Firefox 13. The information back then were based on the aurora release channel, and information that Mozilla had posted at that time. Firefox 13 has now been moved to the beta channel where it will stay for the next six weeks before it will become the the stable version of the web browser replacing Firefox 12.

When you look at the changes in Firefox 13.0, you will notice that some that Mozilla aimed to release in the browser version were pushed further down the line, debuting in Firefox 14 or even later instead.

The most obvious change, or changes, are two new pages that Firefox users will come upon when they start the browser for the first time. First the new about:home start page featuring a Google search form and quick access to features and information such as bookmarks, the browsing history, downloads, or a button to the restore previous session. 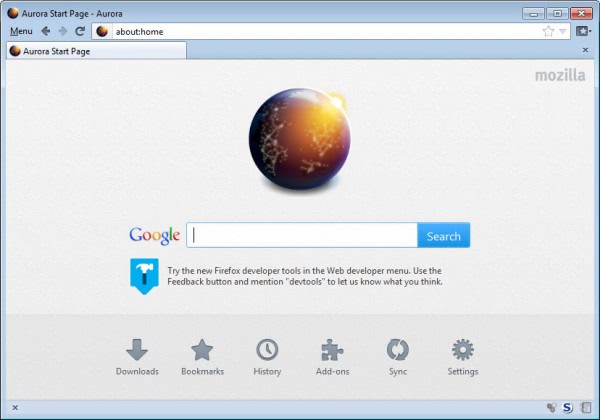 The second change is the new blank tab page that Firefox users will notice when they open a blank tab in the browser. This page gets automatically populated with a speed dial feature that is displaying the nine most popular websites based on the user's browsing history. Important websites can be pinned to make them permanently available on the page, and it is furthermore possible to use drag and drop to change the order of pages as well. Firefox users who do not want to use the new feature can disable it with a click on the hide the new tab page button.

One of the main development aims in recent versions of the browser was to improve the browser's responsiveness and performance. A visible feature in this regard is the new tabs on demand feature when sessions are restored on startup. Firefox basically loads the active tab on startup, and not all of the tabs that had been open in the last browsing session. These websites are loaded when the user clicks on the tabs, which speeds up the start of the browser.

The developers have also made progress integrating a new restoration feature in the browser. First code parts were added to Firefox 12, and work continued in Firefox 13. If things go ahead as planned, Firefox users will be able to restore the browser if they notice crashes and other issues with it.

Firefox 13 is also the version of Firefox were a new smooth scrolling feature is integrated in for the first time. Mozilla originally aimed to release the feature in Firefox 12, but it had to be postponed one release. It is possible to modify the scrolling distance of the feature in the about:config of the browser. You need to filter for the parameter toolkit.scrollbox.verticalScrollDistance and change the default value of 3 to a higher value if you want the distance to increase, or a lower value if you want it to decrease. It is still possible to disable the feature in the Firefox options under Advanced > General > Use smooth scrolling.

Have you had the chance to play around with Firefox 13 yet? If so, what is your impression of the browser?