If you are not a fan of hosting your files in the cloud, a service that the majority of file synchronization services offer at this point in time, you may be interested in Cubby, a new contender by the developers of Log Me In. Cubby is currently in beta phase, and it can take some time before you get your invite. I just received my invite yesterday after signing up the day it was announced.

Cubby at its core gives its users 5 Gigabytes of online storage for free. Users can use the online space to synchronize local files with the cloud and among multiple devices. While not coming close to SkyDrive's 25 Gigabytes, it is 3 Gigabytes more than Dropbox offers, and likely the same amount that Google Drive will launch with.

Setup is a breeze and should not take longer than a minute tops. When you start the Cubby client locally for the first time, you are asked to create an account. The account email is filled out automatically, so that you only need to enter an account password to complete the setup. These log in information are then later used to access the contents on local systems, and in the cloud if the files are synchronized with it as well.

Cubby offers two features that Dropbox is currently not offering. First the ability to synchronize directly with other computer systems that run the software. If that option is selected, the cloud is bypassed and files are synchronized directly between devices. For this to happen, the computers need to be online at the same time, as there is otherwise no option to transfer files between them. Users who want to sync files between devices that are sometimes - or even all of the time - not simultaneously online can use the cloud feature to "park" files and folders in the cloud before they are synchronized with other devices.

Probably even bigger than that is the option to select all kinds of folders on a system for synchronization. This is unlike Dropbox where all files and folders need to be placed inside a root sharing folder. Having multiple folders configured in the program enables customized synchronization options, as you can select the devices that you want to sync the folder with for each folder individually.

This way you can select a folder that you want to sync with the cloud and all devices, and folders that you only want synchronized between select devices. It does not get better in terms of flexibility. One example: You can configure your work PC to sync documents with your laptop automatically, but not your home PC. Your home PC could sync a mp3 folder with your Android phone to always have the latest music available on the phone.

Cubby users can invite others to stay in sync with a select folder. This works similar to Dropbox's shared folder feature. There is also the option to make a folder available for the public. This basically has the consequence that anyone with the right link can access that folder, and requires the folder to be synced with the cloud.

You can log into the Cubby website with the same login credentials that you have selected during setup. All files and folders that you are syncing with the cloud are listed here, with options to upload new files or folders directly from within the web interface.Â  Files can be downloaded, but not deleted or modified. Deleted files can however be displayed in the web interface. 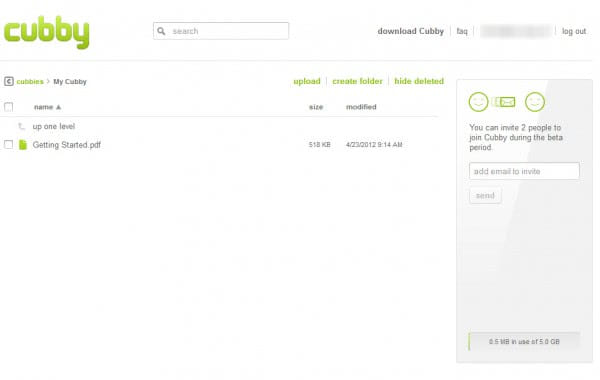 The developers of Cubby at this point in time are making available desktop clients for both Windows and Macintosh, and mobile clients for Android and iOS. There are no clients for Linux, nor Windows Phone, Blackberry or other devices. It is however still possible to access the files on the Cubby website.

Cubby at the time of writing has a number of advantages over Dropbox. First the ability to sync data directly between devices bypassing the cloud, then the ability to select any folder on the system for synchronization, and third 5 Gigabyte of online storage instead of the 2 Gigabyte that Dropbox offers.

Dropbox on the other hand offers a Linux client, and a client for BlackBerry devices that Cubby does not offer. It is also making use of a referral system to increase the initial 2 Gigabytes without having to pay for it.