MSI has just released the final version of MSI Afterburner 2.2.0 after a series of time-limited beta versions (15 altogether). MSI Afterburner, which we have previously reviewed multiple times here on Ghacks, is without doubt one of the best video card configuration programs on today's market. Many non-MSI graphics card users shy away from the program thinking that it will only work with adapters manufactured by MSI, when this is in fact not the case.

The version history lists a lot of changes and additions to the program that beta users were able to test for quite some time now. The change that I'm personally most interested in is the new video capturing option, that can be used to capture PC games on the computer. This works better than Fraps and comparable solutions, at least on my gaming setup.

Configuration options for this are available under Settings > Video capture in the program properties. Here it is then possible to define a global video capture hotkey, select the desired frame rate and quality, and the video format the capture should be saved in. 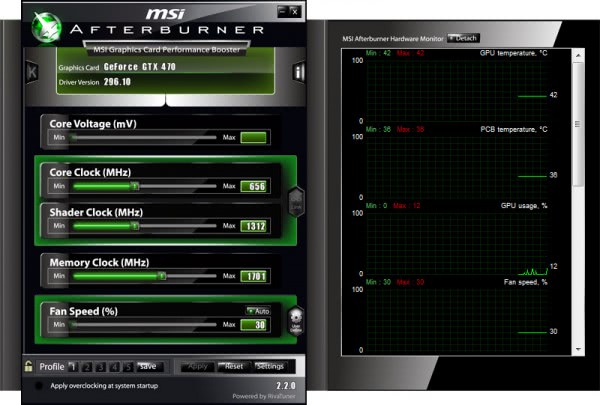 There is also better support for Windows systems that go into suspended mode (with MSI Afterburner being no longer terminated when that is happening), a new force fan speed update option, and many improvements to the MSI On-Screen Display.

Existing MSI Afterburner users can install the program on top of the existing installation, but only if they make sure that previous versions of the program are not running in the background during the installation.

Interested Windows users can download MSI Afterburner 2.2.0 from the official website that is linked above. The program is compatible with all recent 32-bit and 64-bit editions of the Microsoft Windows operating system.