One of the biggest hurdles for new Wikipedia contributors is the editor that is currently offered on site. The editor is basically a plain text editor and authors have to learn the markup language to add, edit or delete information on Wikipedia pages. While it is often possible to use copy and paste for that, for instance to add a new link to a Wikipedia article, the syntax is often not that easy to cope with, especially if you plan on adding a new article to the site.

Howie Fung, Senior Product Manager, notes that there "is plenty of evidence that wiki-markup is a substantial barrier that prevents many people from contributing to Wikipedia and our other projects".

That's without doubt one of the core reasons why the Wikimedia Foundation has started to create a visual editor for Wikipedia. The editor is currently available as a developer prototype. The editor is nowhere near as robust to make it available for all Wikipedia editors just yet, but it shows some of the editor's planned capabilities. 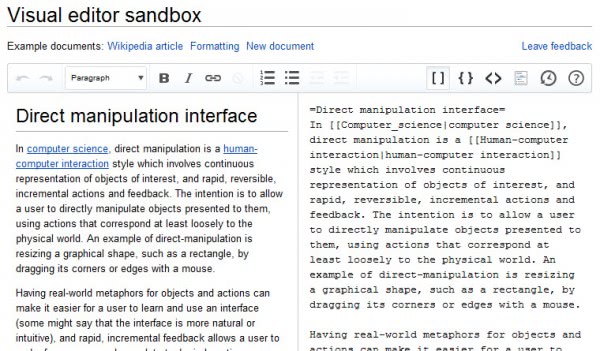 The developers have published a visual editor sandbox to provide all contributing and future editors with the opportunity to test the visual editor before it goes live on the site. When you open the editor sandbox, you see a single toolbar at the top and the article beneath. Everything on that page is editable.

The first half of the toolbar provides access to common editor options, like adding headings to the article, making text bold or adding links to it. The second half switches between different view modes. It is for instance possible to display a wikitext or json view mode next to the editor's text. Strangely though, those view modes do not allow editing of contents.

The developers plan to add features and upgrade the editor to make it more robust before it goes live later this year on the site. A visual editor could increase the editor count on Wikipedia significantly. What's your take on the move?