Rumors of Google Drive, or GDrive as it was named in the beginning, started to emerge at around the same time that the popular file synchronization and hosting service Dropbox opened its doors to the public (that was 2007). All went quiet shortly thereafter and it appeared as if the project had been canceled by Google.

The Wall Street Journal is reporting that Google is about to launch Google Drive for real this time. Sources are not disclosed, and information other than the name of the cloud based hosting service are not offered in the article.

It is likely that Google Drive will offer free basic storage options and upgrades for users and teams that require more than the basic amount of storage. The pricing structure has not been revealed yet, but it seems possible that Google could simply add Drive o the list of services that you can already purchase additional storage for. 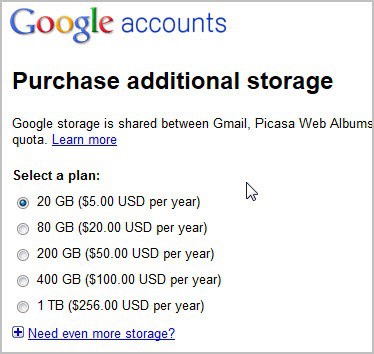 When you compare those prices to Dropbox's tiered structure, you will notice that they are a lot cheaper. Google Drive users had to pay $5 per year for 20 Gigabytes of extra space, while the cheapest storage increase on Dropbox would set them back $99 per year for 50 Gigabytes.

Then again, it is not only about storage space but also about functionality and accessibility.

Techcrunch back in September of 2011 mentioned that Google Drive would come with a synchronization software to sync data between desktop computers and mobile devices. If that is the case, and if support goes beyond Windows and Android, then it could force Dropbox to adjust their pricing structure to stay competitive.

It is not clear yet if Google will encrypt data stored on their servers.

Drive ultimately would allow users to access data on the Internet and on all supported devices.

It is likely that Google will make the service available under http://drive.google.com/. The page is currently returning a 404 not found error which indicates that it has already been created by Google (if you open a bogus subdomain you get a different error).