One of the issues that many users who tried Google Music experienced was the inability to download music officially to a connected device. And while the service's app saved some of the songs locally while listing, it did not really provide a comfortable user experience.

Third party programs like Google Music Downloader filled the gap, but many users hoped for a integrated solution as those programs were usually only compatible with a specific browser or device.

Google yesterday made an announcement on Google Plus where they stated that US Android users can now download all songs, including self-uploaded songs and purchased songs, from Google Music to their devices. This improves the service significantly as users can now download music whenever they want. Music can now be downloaded so that you can listen to it on all of your devices, and without the need for an Internet connection. This may be useful if you are on a low-bandwidth plan or want to listen to your music on devices that are not compatible with Google Music.

Google Music web users can simply click on the small menu icon that appears when hovering over a song name or album. A left-click on the icon displays the new download option 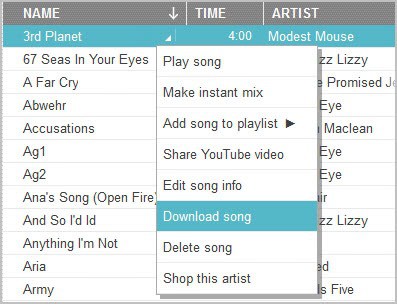 Multiple songs can be selected by holding down the Shift key while left-clicking on songs in the listing.

Google's Music Manager now displays a download tab that leads to two options to download music to the local computer system. Download purchased music downloads only the albums and songs that you have purchased on Google Music, while Export your library exports all songs to the system. Google notes that only users who have uploaded music using the Music Manager will see the download tab in the program.

Songs can only be downloaded two times from the Google Music website. The Music Manager does not have that restriction though. 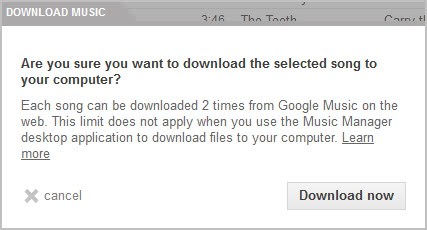 The addition of a download option makes Google Music more accessible from a user perspective. Still, Google has a long way to go, especially in the supported countries department (via Caschy)