Now that we have covered the best Firefox add-ons of 2011, it is time to look at the best tips for the browser as well. A lot has changed development wise in 2011. Mozilla has switched to the rapid release process after the release of Firefox 4 which has increased the version of the browser to 9 (stable) at the end of 2011. That's five new versions in less than a year, and the prospect to see Firefox 18 to be released at the end of 2012.

Mozilla is facing more competition than ever. First and foremost from Google's Chrome browser that is posed to overtake the Firefox web browser in market share in 2012 (depending on the stats you are looking at it may have already happened). This has not kept the organization from signing an agreement with Google to keep Google the default search provider in the coming years.

Add HTTP Back To Address Bar - Mozilla has removed the http prefix in the address bar. Here is how you can add it back.

Change Firefox’s Minimum, Maximum Tab Width - Display more or less tabs in the browser at the same time without scrolling.

Configure Firefox To Delete All Cookies On Exit But Select Ones - Cookies can be beneficial, e.g. to stay logged in, and not beneficial, for instance when they are used for tracking purposes.

Configure Firefox To Install Add-Ons Faster - Save a few seconds every time you install add-ons in the Firefox web browser.

Delete Old Extension Preferences In Firefox - Extensions may add preferences to the browser during installation that do not get removed on uninstallation of the add-on. Here is how you can remove them.

Display All Modified Firefox Preferences - Sometimes you may only want to display modified preferences in Firefox to quickly change or reset them. 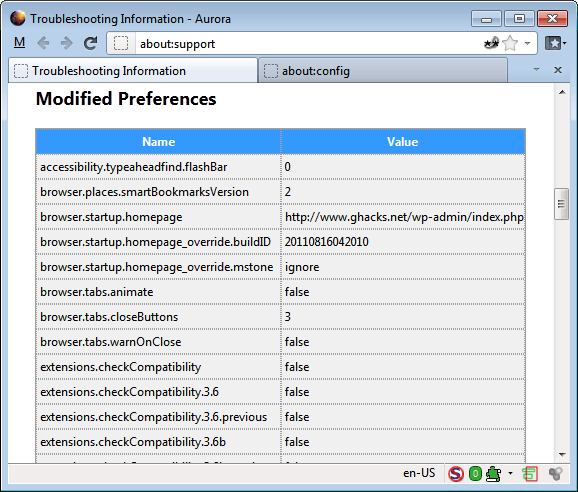 Don’t Like The New Firefox Button? Then Change It! - How to change the Firefox button.

Firefox, Thunderbird Lagging? Lag Fix Inside - If you are experiencing lags in Thunderbird or Firefox, you might want to try this fix.

How To Downgrade Firefox Add-ons - This explains how to install an older add-on version in the browser. Can be useful if the new version has bugs, is incompatible or features that you do not like and do not want to use.

How To Run Firefox Stable, Beta, Aurora And Nightly Simultaneously - Firefox is offered in four different channels, and even some special test versions. (see also How To Create Multiple Firefox Profiles For Specific Tasks).

How to setup a Firefox Test Environment - A test environment can be useful for various purposes, for instance to test add-ons or browser related settings, or to divide different usage scenarios (e.g. work and after-work).

How To Switch Firefox Update Channels - How to switch between Nightly, Aurora, Beta and Stable channels of the browser. 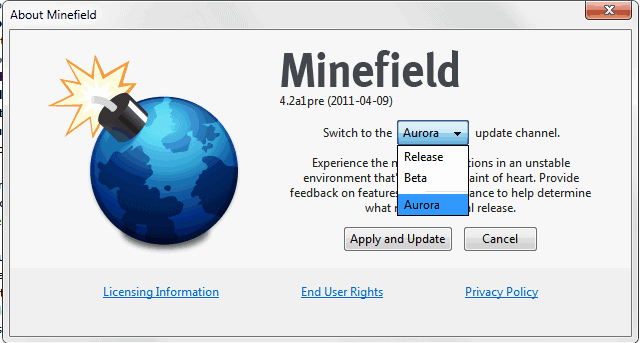 How To Tweak The Firefox Address Bar - A detailed tutorial on customizing the browser's location bar.

How To Uninstall The Babylon Toolbar Completely - A detailed uninstallation guide.

The Best Firefox Security Add-Ons - The best security add-ons for the browser.

Why Are 2 Plugin-Container.Exe Processes Running? - Explains why you may see more than one instance of Firefox's out-of-process plugin process running on your system.

Previous Post: « Save and Load Firefox Sessions With Session Manager
Next Post: Change The Color Of The Firefox Scrollbar »