Display Multiple Clocks On Your Desktop

As a webmaster I communicate with users and companies from all over the world. While that's usually not a problem when I'm writing emails, I sometimes make calls and that's where different time zones come into play. I have to time the calls to make them when the other person is awake or in office.

I obviously expect the same courtesy to avoid getting calls late at night when I'm sleeping. If you know your time zones, you could probably do without additional clocks for other locations in the world. If you are like me, you like little visual reminders. That's where the free software Qlock comes in.

The program adds as many clocks as you want to the Windows desktop. When you first install and run the software, four clocks are placed on the desktop that you can move around individually. They display the date and time for New York, London, Los Angeles and Tokyo.

A right-click on a clock opens a context menu with options to create a new clock, delete or modify the selected one. Just select Set City from the context menu to change the city to another one. 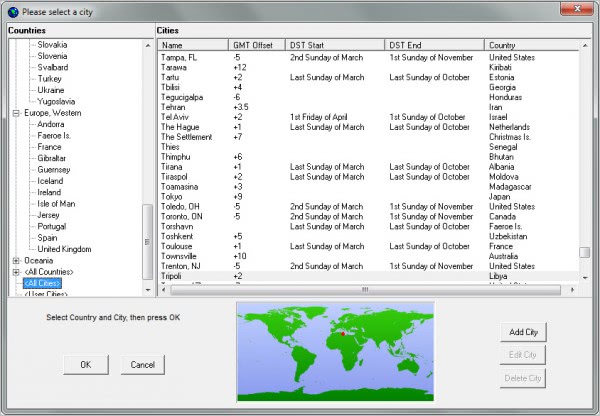 The configuration window displays countries on the left and cities of the selected country on the right. New cities can be added with a click on Add City. You need to enter the name of the city, the GMT offset and daylight saving times when applicable. User created cities become then selectable under User Cities in the main interface.

Several color schemes are available to visually distinguish cities from each other. The large clock skin can be changed to medium or small, which both display less information on the screen. The small clock skin for instance displays only the name of the city, the day of the week and the time.

A professional single user version and a gold multi users version of the program are offered as well. They add functionality like alarms, desktop profiles, sticky notes or daily fx rates to the program.

Qlock is an easy to setup software to display multiple clocks on the Windows desktop. It gives users full control over how many clocks they want displayed on their desktop.

The free version is compatible with all recent 32-bit and 64-bit editions of the Windows operating system. Downloads are provided on the program homepage. (via Dottech)