Google's Android store has had it's 10 billionth download this week, and the news was announced on the Google blog.  To mark the milestone the company has also announced that for the next 10 days it would cut the price of some of the top apps to just 10 cents each.

The growth in apps, not just for Google but for all the smartphone and tablet platforms is still growing exponentially as people discover the power and flexibility the devices have.  In their announcement Google said...

One billion is a pretty big number by any measurement. However, when it’s describing the speed at which something is growing, it’s simply amazing.  This past weekend, thanks to Android users around the world, Android Market exceeded 10 billion app downloads—with a growth rate of one billion app downloads per month.  We can’t wait to see where this accelerating growth takes us in 2012.

The figures released by Google show that their market reflects the current worldwide trend and is gathering pace.  Their store took 22 months to reach 1 billion downloads but only another 9 to get to to 10 billion. 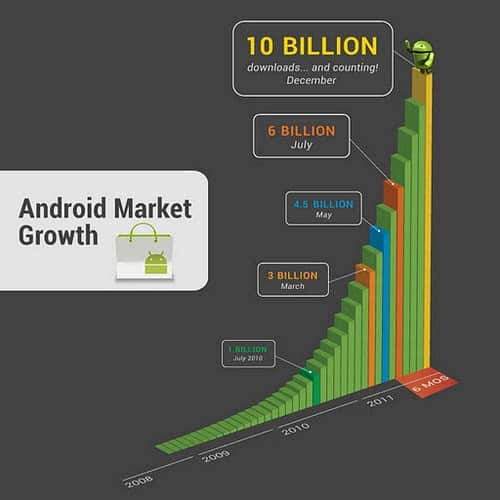 In an interview with the BBC Geoff Blaber from analysts firm CCS Insight said...

Android is currently the world's best-selling smartphone platform but it has come under fire for a lack of due diligence to malware in its store.  Figures have been released by security companies showing an accelerating malware problem on Android.  Many people are now beginning to hit back at the anti-virus firms with some very strong and robust claims that they're hyping the malware threat unnecessarily to boost sales of their own anti-virus products for the platform.

However hyped the malware threat to Android users might be it's still wise to be protected as there may come a time when mobile phone operating companies no longer want to insure users against the premium rate texts sent by the fraudsters.

Android's growth in the smartphone and tablet market for the foreseeable future however is pretty-much guaranteed, boosted by the recent launch in the US of Amazon's first tablet, the Kindle Fire.  This tablet is widely expected to be the world's biggest selling tablet when overall figures are released in six months or so from now.

The BBC reported that "Carolina Milanesi, from analysts Gartner, said download numbers were a poor measure of success." but Android still has more handset activations per day than any other smartphone or tablet platform.  It's by far the biggest and most popular platform out there at the moment.

How Windows 8 tablets, on new ARM-based hardware will fare against it when they begin to appear late next year or in early 2013 remains to be seen.  Android will already have gone through at least two more versions by then and will be a far more polished and accomplished operating system.  Microsoft's Windows Phone OS is already struggling to keep up with Android and make any impression in the marketplace.  Android's open-source nature, which allows handset manufacturers to modify it has helped considerably in this, as has the fact that it is free too.  HTC are one manufacturer that has taken full advantage of this and will no doubt continue to do so.